Erkki-Sven Tüür's 'Mythos', commissioned for the centenary of the Republic of Estonia

Erkki-Sven Tüür's Symphony No. 9 'Mythos' was commissioned by the  Government Office of Estonia to celebrate the 100th anniversary of the Republic of Estonia, and the work was premiered in Tallinn and Brussels in January 2018 by the Estonian Festival Orchestra conducted by Paavo Järvi.On this new disc from Alpha Classics, Paavo Järvi conducts the Estonian Festival Orchestra in live recordings of Erkki-Sven Tüür's Symphony No. 9 'Mythos', Incantation of Tempest and Sow the Wind..., and the disc also celebrates the composer's 60th birthday.

Erkki-Sven Tüür is one of the major contemporary Estonian composers; he studied at Tallinn Conservatoire with Jaan Rääts, and with Lepo Sumera. For a period he was part of the progressive rock group, Spe. His output includes nine symphonies and an opera, Wallenberg.  We caught music by Tuur and by Raats at the Tallinn Chamber Orchestra's concert at the 2015 Vale of Glamorgan Festival.

Paavo Järvi founded the Estonian Festival Orchestra in 2011 as being resident at the Pärnu Music Festival, bringing together the best of Estonian talent alongside leading musicians from around the world. The orchestra became the first Estonian orchestra to perform at the BBC Proms in 2018.The symphony starts from 'primordial chaos', with Tüür gradually creating a sense of order through an emerging string figure which develops.

But even in gurgling chaos, Tüür's writing is full of colour and texture, and the timbres throughout the work are striking. In his programme note, Tüür is reluctant to give a programmatic description for the piece, yet there is very much a sense of Tüür using the orchestra to create a world, complex, richly textured and dynamic.

The symphony is in a single over-arching movement, with a strong sense of structures developing out of primitive material. Yet throughout, there is an underlying feeling of power surging, complex string textures take place over burgeoning waves of brass sound, and there is a sense of excitement, the stirrings of something being created. As the work progresses, we become aware of Tüür gradually bringing musical fragments into focus to create something new, the dramatic textures coalesce at the end of the work into a striking new sonic world.

The result is a powerfully striking new work, a world away from any sort of nationalistic tub-thumping, and a major addition to the symphonic repertoire. Remarkably the performance here is the premiere, recorded live in January 2018 in Tallinn; the sound is terrific and the recording captures both the excitement of a premiere and the depth and complexity of the writing. You get no sense of the performance being a work in progress, this springs fully-formed and vibrantly exciting from the loud speakers.

Tüür's The Incantation of Tempest is a short work commissioned by the Bamberg Symphony Orchestra as part of its Encore! programme creating new music suitable for encores. It was premiered in 2015 by the Bamberg Symphony Orchestra conducted by Jakub Hrusa, and Järvi later started using it as a concert opener. It starts with drama, and throughout Tüür achieves a gradual building of excitement.

Paavo Järvi premiered Sow the Wind... in Paris in 2015 with the Orchestra de Paris. The title comes from a passage in the book of Hosea, 'For they sow the wind, and they shall reap the whirlwind', and the work is an evocation of the effects of reckless human activity whether it be climate change, mass migration of people or extremist movements.

Here we have complex and dramatic textures,  with Tüür again seeming to create a complete world. The work opens with what the composer describes as a 'tidal wave' which washes by, leaving an evocative violin solo and a sense of evolving drama. Again, the musical writing is full of wonderful sonorities and textures.

All three performances are recorded live, the second two works at the Pärnu Music Festival, and throughout the disc you sense the orchestra's responsiveness and its sympathy to the composer's style. You could buy this disc for the outstanding orchestral performances or for the powerful new works, or both; but you should indeed buy it.

Posted by Primavera at 10:28 AM No comments: 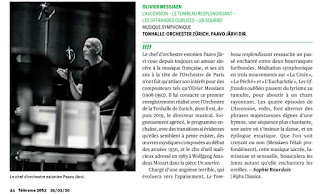 Posted by Primavera at 8:29 PM No comments:

"Mythos" rewarded with the Diapason d'Or 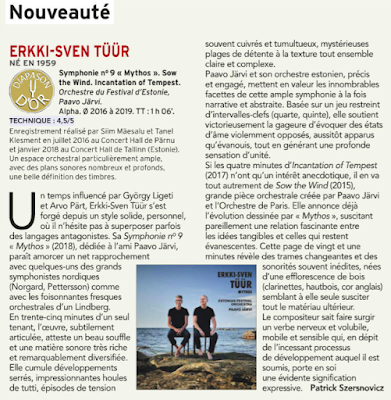 Posted by Primavera at 2:21 PM No comments: 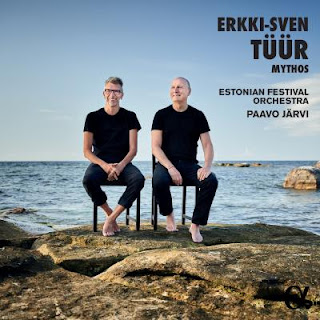 Composer, flautist and one-time rock star Erkki-Sven Tüür is one of the leading composers of the Baltic region today, with numerous orchestral, chamber, choral and other works under his belt and a style that is both boldly avant-garde and deeply rooted in the compositional traditions and schools that preceded him.

Three of his recent works – from 2014, 2015 and 2018 – have recently been recorded by Tüür's long-time friend and close musical collaborator Paavo Järvi with the Estonian Festival Orchestra. The music explores highly contemporary themes of chaos and turbulence, through a style that grows and develops continuously throughout the piece. While often dissonant, or at least astringent, it's utterly engrossing and thought-provoking in a way that few contemporary composers have matched.
I spoke to Erkki-Sven about these works, and about his thoughts on the idea of "chaos" that in various guises underpins the whole album.

The commissioning of the Mythos symphony formed part of the Estonian centenary celebrations in 2018. All three Baltic states count their official 'age' from their first independence in 1918, not from its restoration in the 1990s which much of the world sees as the new 'beginning'. Why do you think that sense of deeper continuity is so important?
For me the reasons of the continuity are absolutely self-evident. All the basic laws and rights generally accepted in normal democratic societies were violated by the Soviets in 1940. We did not establish a new state after the collapse of USSR - we restored the Republic of Estonia which was violently taken away from us. This is a huge difference.

You’ve dedicated the Incantation of Tempest to your compatriot Veljo Tormis, who died in 2017 and with whom you seem to share a curiosity about the pre-Christian mythology of the Baltic region. Do you see him as an influence on your own musical style?Not in terms of style or musical language. But the thorough consistency he showed by following the path he had chosen is most impressive and, as a role-model, very much worth following.

For the enlightenment of our non-Estonian-speaking readers… Is Incantation of Tempest’s Estonian title Tormiloits a deliberate pun on Veljo’s name, or just a happy coincidence?For sure - and as we know how many kinds of incantations or magic spells he has also used in his oeuvre, the other part of the word 'loits' ('spell') fits perfectly into this title.

Sow the Wind... is a politically engaged piece, reacting to the chaos unleashed by climate change, the rise of the far right and other trends. Given how reticent you are about imposing a definite narrative on the symphony, how did you come to write a piece with such a completely opposite approach – one that states its position unambiguously?I don’t feel that this approach is so opposite. All these titles of my orchestral (or instrumental in general) works should not be taken too literally. They should be seen rather as hints to stimulate the creative imagination of the listener: my aim is not to depict something particular with the sounds. As I have said about this work - In other words, the wind has been sown despite the potential repercussions, and consequently the whirlwind is often reaped by the following generations. I created my composition with these thoughts in mind; however, this is by no means a musical narrative of the above events, i.e. a 'programmatic symphonic poem'. The development of musical ideas simply follows a slightly similar pattern; small, relatively neutral details start evolving and producing unpredictable twists of events. Their character also transforms as it intensifies, the initial 'gusts of wind' growing into veritable 'whirlwinds'.

The contrast between the primordial natural chaos of Mythos and the contemporary human chaos of Sow the Wind... is thought-provoking; chaos seems to inspire you both positively and negatively. How do you incorporate into your music the principle of small 'pebbles' leading to massive 'avalanches'?Chaos can generate very different qualities. There is one aspect of the certain 'nothingness' or pre-birth situation which perhaps interests me more than the others: the chance for totally different and unpredictable subsequent developments. The feeling of status nascendi ['latent potential'] is often something I’m trying to reveal during the opening part of my scores. Then, little by little 'key intervals' emerge, followed by a motif based on these intervals, then the motif is prolonged and prepares to shape a wider 'arch' or 'wave' and so on. I am very keen on this kind of organic development. It is like the seed which is placed in the soil: first we see only a fragile greenish twig and, although we have no idea about the final shape it will take in the future, we are certainly able to detect the power of life in it! After years have passed by we can wonder at how amazing the crown of this tree is, every branch forming a perfect part of it. Nothing could have been shaped otherwise! And all this was potentially there, in this little twig. This process describes my idea how the music should mould itself; at least I am trying to shape it in a similar manner.

The conclusion to Sow the Wind... is not a hopeful one; the music seems to disintegrate and collapse, and it’s not difficult to draw parallels with contemporary concerns about climatic and other challenges. Is that conclusion your own prediction for the future?No. Even the most educated scientists cannot predict the future, so why should I think that I am somehow better informed? But I have my instincts, my fears, my hopes, my beliefs. As an artist I have to be truthful to the subjects that really matter to me. This work is just a reflection of one’s hesitations and endless inner monologues.


https://www.prestomusic.com/classical/articles/3175--interview-erkki-sven-tuur-on-mythos
Posted by Primavera at 11:44 AM No comments:

https://www.ksta.de/kultur/eindrucksvoll-breite-klangfarbenpalette-36352094
Posted by Primavera at 1:07 PM No comments: