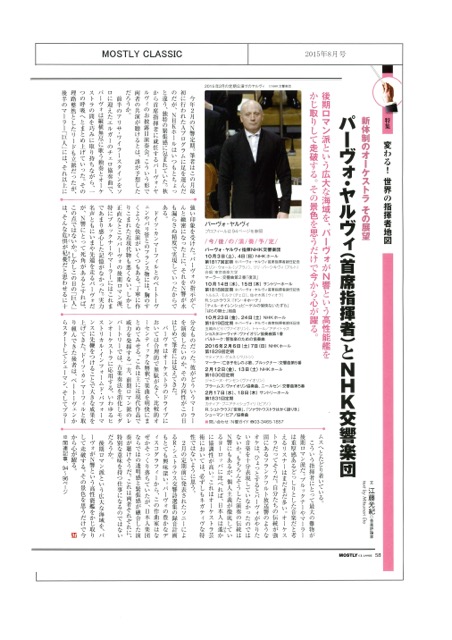 Posted by Primavera at 8:12 PM No comments:


PARIS/FRANCE: With Chostakovich Violin concerto no 2, with Philippe Aïche as soloist, it became and agressive concert, full of sadness, and also beauty in the middle of the sadness and agressivity. This sadness and dark mood was contrasted by Beethovens 9th Symphony, which ends with the “Ode to Joy”, a poem by Friedrich Schiller.

All the first parts sadness and darkness, was a great contrast to the happening in the last part of Beethovens 9th Sympnhony which was programmed after the break,

The second violin concerto was originally created in 1967 in Moscow by David Oistrakh, it was a 60 years birthday present to Oistrakh from Scostakovich. 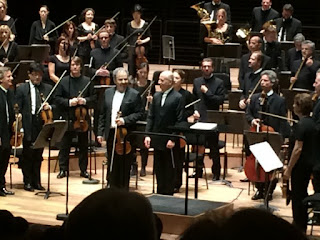 Philippe Aïche managed brilliantly to perform the magic of the Russian art of violin in this extraordinary Sovjetique musicale excellence. In the second part he took good care of the melancholy

Among critics, Beethovens 9th Symphony, is almost universally considered Beethoven’s greatest work, and many consider it one of the greatest compositions in the western musical canon.
However for me, personally, I feel that many of Beethovens Symphonies gives me more interesting parts, as i feel that, a lot of this 75 min. long symphony is “only”, but also “elegantly” building up the choir and singing soloists in the last movement, with always modulating on themes that we, when we know the symphony is directing in to the final part.

The symphony was the first example of a major composer using voices in a symphony, thus making it a choral symphony. The words are sung during the final movement by four vocal soloists and a chorus. They were taken from the “Ode to Joy”, a poem written by Friedrich Schiller in 1785 and revised in 1803.

Beethovens 9th. Symphony is a large work, and in this cooperation for the first time (as far as i know) between Orchestre de Paris and Paavo Järvi, it is allways exiting how it will function, and happily they were going to repeat it at the concert 18th of June.   The first part was powerful, sometimes a bit too powerful for me, but in the second part with the dialogue between horn and wood and the direct dialogue between solo flute and solo horn is very interesting and was beautifully and with great musicality played by the two excellent soloists.

The final is the hit with its fanfare sounds in the deep strings and beautifully with one of the coming leading themes in the bases continuing up in the lighter strings andthrough all the groups is a masterpiece by Beethoven, taken well care of by the Orchestra.

With good soloists like Matthias Goerne (bassbaryton), who was beautifully and very well sounding opening it all in the singing part, and  Michael Schade (tenor), together with Luba Orconásová (sopran) and Petra Lang (mezzo), and a very well  singing Choire de Orchestre de Paris, with app 110 persons, led by Lionel Sow, the last vocal part of this famous Beethoven Symphony was in the very best hands. The sound of the choire was some times extraordinary well formed.

Posted by Primavera at 8:03 PM No comments:

Shostakovich's First Concerto is rightly popular, possibly because it so immediately evokes the paranoia of living in Stalinist timesSteven Isserlis is a man with a sprightly and sometimes spiky sense of humour. On his website, among charming literary rambles and a recent, beautifully turned tribute to his teacher Jane Cowan, he discusses enthusiasms that include Fred Bassett cartoon books and lists his hates, from Delius to caviar and tinned tuna.

Isserlis is coy with his recordings. Rather than a checklist of his many releases, we get pithy observations on a select few. At his most wry, he assesses a 1999 set of reissued performances as "a slightly mixed bag -- but it's cheap".

Even without acknowledging seconded appearances on marketing ploys like Music for Dinner Parties and Zen Classics, Isserlis has created a substantial discography.

His new recording of Russian cello concertos with the Frankfurt Radio Symphony Orchestra under Paavo Jarvi is up with his best. Shostakovich's First Concerto is rightly popular, possibly because it so immediately evokes the paranoia of living in Stalinist times, dramatically caught in its stalking horn solos.

If music could tip-toe, then Isserlis does just that at the beginning, while Jarvi waits patiently to hurl massive crescendos that warn of dangers lurking ahead. How cleverly the almost Elgarian lushness of the second movement underlines the irony of beauty surviving in bleak times.

After this, a masterly five-and-a half-minute Cadenza, a movement in its own right, makes me realise why this cellist's 2007 recording of the Bach solo suites is never far from my player.

Prokofiev's E minor Concerto Opus 58 is a comparative rarity, begun in Europe in 1933 and finished five years later after the composer's return to the Soviet Union.

It may have a troubled history but one can easily sense the thrill that the score's original instigator, cellist Gregor Piatigorsky, might have felt were he able to hear Isserlis' effortless navigation of its slippery opening march.

The scherzo of Prokofiev's Allegro giusto is like a sleek thunderbolt, while the musicians' brilliant meld of fire, ice and lyricism perfectly catches the many shifting moods of the 18-minute Theme and Variations that concludes the work.