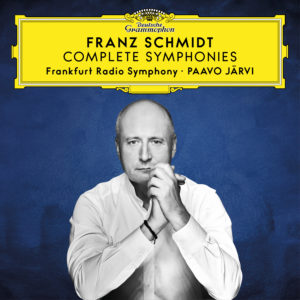 https://scherzo.es/paavo-jarvi-graba-las-sinfonias-de-franz-schmidt-para-deutsche-grammophon/
Posted by Primavera at 11:11 AM No comments:

Unlike the other two Proms I’ve reviewed this season, last night’s by the Philharmonia did not have any bells and whistles when it came to the staging, nor did it explore the edges of the repertoire. But the repertoire choices were good: progressing from the chamber orchestra forces of the first two pieces to finish with Mozart’s last and beefiest symphony, although Mozart at his beefiest is still no Bruckner.

The originally-billed Esa-Pekka Salonen withdrew from the concert and his late replacement was Paavo Järvi (pictured below). He clearly enjoyed himself, conducting with a wry smile through Ravel’s Le Tombeau de Couperin and enjoying the right/wrong notes of Shostakovich’s First Piano Concerto.

Ravel's suite was written during World War I in tribute to deceased friends. But I can never hear it as tragic: rather the Baroque-tinged dances seem to celebrate life and movement. The focus of the orchestration is the oboe, with solos in each of the movement. Tom Blomfield was brilliant, fluid in the intricacies of the “Prelude”, spry in the dotted rhythms of the “Forlane” and languid in the middle section of the “Rigaudon”.

The tempos were fast – requiring some fleet horn playing by Diego Incertis Sánchez – but with a pleasing give at the ends of the lines in the “Menuet”. Ravel conjures untold colours from his chamber orchestra, but the bite of the woodwind playing was the lasting impression.

There is also bite in Shostakovich’s concerto, which reduces the orchestra to strings alone, but adds a solo trumpet, acting as an alternative pole to the piano, a pithy commentator often bringing things back down earth. Jason Evans, the principal trumpet of the Philharmonia, was making his first appearance as soloist with them. He was suitably brittle in the outer movements, but found a wistful tone in the slow movement, muted, bluesy, and more than a bit Hollywood.

Benjamin Grosvenor (pictured below) flew through the difficulties of the fast music. He has a high, active finger action and bold sound, relishing the restless, almost manic good humour of the first movement. In the slow movement he focused on the counterpoint between the hands, sometimes, I felt, at the expense of the right hand’s cantabile line.

The last movement is an energetic gallop encompassing a drunken folksong on the trumpet and a muscular piano cadenza – Grosvenor was driven – before the trumpet ends things with a staccato tattoo. It’s an ending that demands audience applause and its lack was like a delivering a punchline to silence.

It took a while for me to warm to Järvi’s take on Mozart’s "Jupiter" Sympony (No.41). I found the fluctuating tempo at the opening a bit mannered and it all felt a bit purposeless after the propulsion of the earlier pieces. The transition into the development section was virtually leaning backwards. But things got better.

The second movement had a delightful chamber feel to it, with the musicians listening to each other as much as watching Järvi. Viewing at home I was disturbed by a very loud helicopter overhead, which I was cursing before realising I could just pause the livestream and resume when it was gone. Not a luxury enjoyed during “in the flesh” concerts!

The Menuetto allegretto danced, Järvi conducting with a broad smile and big round gestures that gave the music a rolling gait. The final movement is the crowning glory of this symphony, and a suitable finale to Mozart’s symphonic output. Here the natural trumpets soared, the period timps had edge – but I felt sorry, here and throughout, for the bassoonists, who seemed a bit meanly treated by the sound mixer. The climax, when the five themes are combined in triumphant counterpoint, is irresistible – but it always gives me pause to think that Mozart probably never heard it. Everyone deserves to hear it.
https://theartsdesk.com/classical-music/bbc-proms-live-online-grosvenor-evans-philharmonia-j%C3%A4rvi-review-%E2%80%93-energy-and-sparkle?fbclid=IwAR3d5ptlklhD2setKDHXROwINrOXNRGwiBq_TPV_nT4S4ua5SFP7cW5p5fo
Posted by Primavera at 5:49 PM No comments: 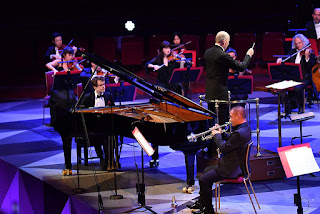 It may be Mozart’s ultimate Symphony but the ‘Jupiter’ (1788) is far from being the composer’s final work (in Köchel’s catalogue it is entry 551 out of 626). From Järvi and the Philharmonia there was a rousing rasp from trumpets and timpani in the first movement, quite driven if flexible in tempo, tutti force contrasted with a lighter touch and some lovely speckled woodwind detailing, to which the slow movement was riposted as a thing of wonder, fluidly poetic and burdened emotionally. Following a Minuet and Trio that lilted along delightfully, the great Finale was somewhat whipped through (if with poise and clarity) losing just a little of its majesty, yet the exuberance was exhilarating … but then came disaster! … having been generous with repeats thus far (including in the Andante) Järvi omitted the Finale’s second half repetition and diminished the Symphony’s scale and his impressive view of it.
https://www.classicalsource.com/prom/prom-14-paavo-jarvi-conducts-the-philharmonia-orchestra-in-ravel-mozart-benjamin-grosvenor-jason-evans-play-shostakovich/
Posted by Primavera at 4:59 AM No comments:

In Switzerland, as from 1October, public gatherings of over 1,000 will be permitted, as long as social distancing can be maintained; that still does not make life easy for concert management. Meanwhile we wait patiently for large-scale works to be possible with a full house, and must make do, for this calendar year at least, with somewhat reduced works played to a reduced audience. This concert managed to feature a fairly large orchestra, all with their own music stands; only one player wore a mask. The entire audience (about half the hall) wore masks and every second seat was left vacant. The indoor bar was closed, there was one, however, outside. Programmes were online and had to be viewed or printed in advance. There was no interval.

Mozart was a mere 18 when he wrote his 29th Symphony (he was eight when he wrote his First); the 29th Symphony is something of a turning point in his musical achievement. I join the number of music-lovers (who include Glenn Gould) who do not think everything Mozart composed was a great work, although if one considers his age when composing, there is no doubt, of course, of his prodigious talent. The symphonies up to No.29 are, by and large, fairly pleasing easy-going works but not compositions which, to my mind, bear repeated listening. Mozart composed his 29th Symphony in 1774 in Salzburg but presented it in Vienna ten years later as a new work, himself realising the value and novelty of his early composition. It is one of the few symphonies he chose to conduct himself, so he clearly thought highly of it. Alfred Einstein is said to have recognised its chamber music clarity. The Viennese public quickly acclaimed the work as a masterpiece.

Järvi deftly juxtaposed the gentle, elegant sections with the energetic, joyous passages; there were many light touches to be enjoyed. Many of the orchestral players had smiles on their faces as they played, always a good sign. The second movement impressed with the beauty of the muted string section, the third bounced along gleefully. The Finale, Allegro con spirito, lit up the hall with its spectacular string displays over two octaves, so-called ‘Mannheim rockets’, glistening like fireworks.

Bartók’s First Violin Concerto stems from 1908, but it took a curious 50 years to reach its first performance, in Basel under the baton of Paul Sacher. It took another 40 years for the Tonhalle Orchestra to perform it. It was written for a violinist Stefi Geyer, born in Hungary, who married a Swiss composer Water Schulthess in 1920. The score of the concerto vanished until after Geyer’s death; apparently Geyer had told Sacher where to find the score. The work is a declaration of love and the ‘Stefi motif’ pervades the work. The first movement Andante sostenuto, after a gloomy opening, is tender, perhaps suggesting unrequited love, but then blossoms into quite a passionate love affair; the movement ends with exceptional beauty. The second movement, an Allegro giocoso, has elements of a Scherzo and symphonic character. It gives the soloist the chance to show off their virtuosic talents, as Lisa Batiashvili did in this performance with considerable aplomb. Discordant notes were attacked with ease and relish. This concerto is an absorbing work, full of interest, and now seems to be performed quite regularly and rightfully after its long absence.

The concert ended with some entertaining Ibert, his Divertissement. It is a work from the late 1920s with links to the ballet scores of Stravinsky and Satie, and reminiscent of Malcolm Arnold. As one expects from Ibert, there are plenty of cheeky moments where the orchestra, conductor and the audience could giggle.

The work has six movements. An Introduction with piano which is a fun romp; a funeral cortège with celesta to lift the spirits; a Nocturne which parodies Mendelssohn’s ‘Wedding March’ from A Midsummer’s Night’s Dream; a delicate waltz (some wonderful slides on the trombone from David Bruchez-Lalli), a jaunty military march and finally the well-known Cadenza with crashing chords from the piano and a scamper to the close, complete with whistle, played by the conductor. He was shown a red card by a member of the percussion section but thankfully stayed on stage to the end.
https://seenandheard-international.com/2020/08/lockdown-easing-in-switzerland-with-paavo-jarvi-and-the-tonhalle-orchestra-zurich/
Posted by Primavera at 4:46 PM No comments: