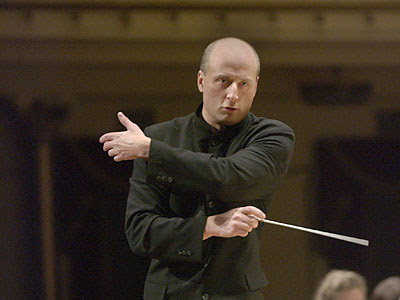 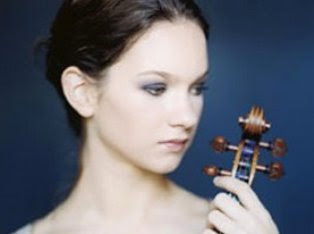 This weekend’s Cincinnati Symphony concert at Music Hall (Dec. 17 and 18) had “special” written all over it. It marked the return of music director Paavo Järvi to the podium after a three-month absence, a guest appearance by one of today’s certified stars, violinist Hilary Hahn, and a delectable program of chamber-sized repertoire.

Indeed, the Cincinnati Symphony became a chamber orchestra, a welcome guise that demonstrated the flexibility of the orchestra, as well as the extraordinary talent that dwells within it. With members of the CSO playing concurrently for Cincinnati Ballet’s “Nutcracker” at the Aronoff Center, it was an illustration of the value of a fine orchestra and the multiplicity of ways in which it can serve a community.

Multi-Grammy winner Hahn, one of the finest violinists before the public today, performed Mozart’s Violin Concerto No. 5 in A Major -- called the “Turkish” for its colorful Turkish-flavored episode in the final movement. With a complement of 25 strings plus pairs of horns and oboes, ensemble was perfect, a word that also begs to describe Hahn's exquisite playing.

The balance of the program was three works for chamber orchestra, Bartok’s 1939 Divertimento for strings, Benjamin Britten’s “Simple Symphony” and the Suite from Stravinsky’s music for the ballet “Pulcinella.” All were performed completely in front of the stage's double proscenium arch, with the acoustical towers aligned horizontally behind them for a “close-up,” intimate experience (at least to the extent the huge hall allows).

Winsome in a long, sea-blue gown, Hahn, 31, was every inch a star. But her true greatness lay in her consummate musicality. Allied with Järvi and the CSO, she presented a classically refined performance, full of detail and nuance, always at the service of the composer. If one may fumble for a metaphor, the music was the aural equivalent of a piece of finely-painted, classic sculpture.

Hahn played with a bright, smooth tone, utilizing tight bowing and tasteful vibrato. Interaction with the CSO was pinpoint precise, and the winds added a layer of great beauty, as in the outer movements where her sound blended with principal oboist Dwight Parry's in some ravishing, jewel-like moments.

Her cadenzas exhibited grace as well as virtuosity. They were like small essays, spun with grace, polish and in the second movement, supple double stopping. She, Järvi and the CSO put lots of zing into the Turkish episode in the finale where the cellos and double basses relished playing rhythmic accents with the wood of their bows.

Responding to the crowd’s ovation, Hahn performed encores by Bach, the Sarabande (Friday) and Bouree (Saturday) from his Partita in B Minor for violin solo. (For Saturday’s audience, she donned a Santa Claus cap before returning to the stage for her encore.)

Järvi opened the concert with Bartok’s Divertimento, a work written on the cusp of World War II during a special moment carved out for him by conductor/patron Paul Sacher at a retreat in the Swiss Alps. In three movements, it is modeled on the baroque “concerto grosso,” i.e. with a solo quartet playing against a larger ensemble. Hungarian folk flavor abounds, particularly in the outer movements. The central Adagio, however, was filled with pain, even horror, as ominous trills and hammer blows intruded on the stillness of the music (premonitions of the conflagration to come are read into this).

CSO principal players excelled in the demanding work, which, particularly in the Allegro finale, is filled with rapid exchanges. Järvi played his hand beautifully at the end, which alternates pizzicato with rushing figures, leading to a fortissimo conclusion.

Britten’s “Simple Symphony” belies its title, for, like Bartok’s Divertimento, more resides in it than would be apparent from such a designation. It is short, often sweet and perky – the pizzicato second movement was a delight – but the slow movement, “Sentimental Saraband,” ached with something more. Often heard separately, the music is heart-rendingly beautiful, suggesting the composer’s deep feelings of nostalgia (the work is built on compositions he wrote as a child). Järvi led it heart-on-sleeve with great tenderness. By contrast, he brought out all the prankishness and good humor of the other three, with plenty of boisterousness in “Boisterous Bouree” (when does it end, really?), playfulness in “Playful Pizzicato” (is that a big guitar or what?) and frolic in “Frolicsome Finale” (with some conductorial choreography to boot).

Stravinsky’s “Pulcinella” Suite called upon the individual and corporate virtuosity of the CSO. The work is drawn from his music for Serge Diaghilev’s 1920 ballet “Pulcinella” based on the Neapolitan commedia dell’arte, with Pulcinella (also known as Punch) tormenting ladies and gentlemen alike with his amorous mischief. It is a brilliant and challenging score (audition material for many an instrumentalist) and called for playing to match. Like Bartok’s Divertimento, it is written in concerto grosso style and was the first of Stravinsky's great neo-classic works.

Less was more here, with an orchestra of 42, including a “concertino” of five strings (two violins, viola, cello and double bass). It was a glory day for the CSO winds, as well, all of whom had moments to shine: Parry in the lovely Serenata; principal flutist Randolph Bowman in the Gavotta; and principal bassoonist William Winstead, also in the Gavotta (second variation), where he was joined in a taxing sixteenth-note accompaniment by bassoonist Hugh Michie. Trombonist Cristian Ganicenco had some of the best lines of the evening in the comical Vivo, where he was joined in some delightful solos by principal bassist Owen Lee. As for concertmaster Timothy Lees and the other CSO principals -- violist Christian Colbert, cellist Ilya Finkelshtyn and violinist Kun Dong filling in for Gabriel Pegis -- they shone everywhere.

No one seemed to have more fun than Järvi, who brought the Finale of the Suite to an end with an airy tune, begun in the flute, which gave way to raucous rhythmic repetitions and an emphatic sign off.

Posted by Primavera at 10:24 AM No comments:

Hilary Hahn is, quite simply, one of America’s brightest stars.

On Friday, the violinist performed Mozart with the Cincinnati Symphony Orchestra, and you couldn’t help but smile through her performance. It was not because of her effortless technique or the gorgeous tone she projected from her violin. There was a genuine, unaffected quality about her music making that made her performance of Mozart’s “Turkish” Concerto one of sheer joy.

Paavo Järvi was back in town for an inventive program designed for small orchestra. (The other half is playing Cincinnati Ballet’s “Nutcracker” this weekend.) Bartok’s Divertimento for String Orchestra, Britten’s Simple Symphony, Op. 4, and Stravinsky’s Suite from the ballet “Pulcinella” allowed the strings and orchestral soloists to shine.

But it was also interesting to hear this performance in a new configuration being used, which places the orchestra closer to the audience. The presence of sound was remarkable.

Hahn, 31, a native of Lexington, Va., first picked up a violin at age 3. She has been touring for half of her life, released a dozen recordings, won fistfuls of awards, including two Grammy Awards, two composers have written concertos for her and she has even appeared on “The Tonight Show with Conan O’Brien.”

That’s impressive enough. But then she picks up her violin, and projects the big, effortless, golden sound that is uniquely hers. Mozart’s Concerto No. 5 in A Major, nicknamed “Turkish” for its finale, was an ideal vehicle for her artistry.

She was animated in her performing, stepping into her phrases as she played, and communicating easily with Järvi and the orchestra, as well as with her listeners. The first movement was ebullient, and she found character in every phrase.

The violinist’s cadenzas, one in each movement, were searching and full of imagination, several times reaching into the stratosphere with pristine intonation. Hahn approached the slow movement, one of Mozart’s most beautiful, with purity of tone and occasionally, a glimpse of old-world romantic style.

Järvi and the orchestra made excellent partners, echoing the gentle beauty of the slow movement, and providing a sizzling Turkish march in the finale.

The enthusiastic response from the Music Hall audience resulted in encore: J.S. Bach’s Sarabande from the Suite in B Minor, a profound performance played with mesmerizing beauty.

For the orchestra, Stravinsky’s neoclassical Suite from “Pulcinella,” which concluded, was a tour de force. The work, in nine movements, was bursting with inventiveness – a mark of Järvi’s tenure here for nearly a decade.

The orchestra performed superbly and soloists made fine contributions, including oboist Dwight Parry’s nuanced phrasing in the gentle “Serenata,” the heroic efforts of bassoonist William Winstead, and the showmanship of principal bass Owen Lee.

Järvi led it all with wit, bringing out unexpected details and keeping the music buoyant. His feeling for color and atmosphere made it a magical performance.

He opened with Bartok’s Divertimento, not performed by the CSO since 1970. The work for strings uses a group of orchestral soloists in concerto grosso style. Rich in folk tunes and rhythms, it was written on the eve of World War II, and includes a mournful Adagio.

After some initial unevenness, the orchestra responded with vivid playing. The conductor went for an earthy quality in the rhythmic finale, which included slapping strings and a rhapsodic cadenza for concertmaster Timothy Lees.

The second half included the subscription premiere of Britten’s cheerful Simple Symphony, evoking childhood tunes. I’ve never heard so much dynamic contrast in an all-pizzicato movement, as in the piece’s “Playful Pizzicato.”

Posted by Primavera at 4:10 PM No comments: 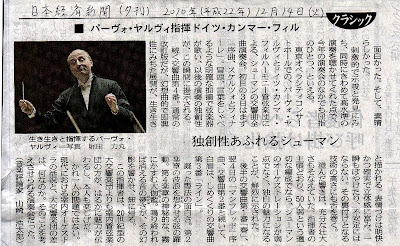 Posted by Primavera at 4:09 PM No comments:

by Blair Sanderson
All Music

Paavo Järvi is not noted primarily as a Bruckner conductor, but this 2008 performance of the Symphony No. 9 in D minor with the Frankfurt Radio Symphony Orchestra promises great things to come if he chooses to record the other symphonies with as much expressive depth and personal connection. Järvi often takes considerable liberties in conducting the Romantic repertoire, and his elastic rubato sometimes seems too loose, yet it works rather well here and seems to open up Bruckner's monumental harmonic rhythms and heavy structures to a more flexible and freer interpretation. Granted, the Symphony No. 9 is still one of Bruckner's weightiest works, and it is many times rendered as if it is carved in granite, so ponderous are its fanfares and dense its orchestration. Yet Järvi draws out a fluid and evenly paced performance from the Frankfurt orchestra, and the overall feeling of the music is of transparency, smoothness, delicacy, and radiance, traits that are seldom associated with this piece, but should be. The first movement retains its gloomy depths and elegiac lyricism, while the scherzo is still menacing in its hammered dissonances, and the Adagio keeps its air of mystery and majesty. But Järvi has given this elevated symphony a more human dimension, and through the rapport he has developed with his musicians, he communicates more intimately and warmly than one might expect in this massive valedictory work, which Bruckner dedicated to God. Thanks to RCA's terrific DSD recording, this is one of the best sounding Ninths to appear in ages, and this hybrid SACD is compatible with conventional compact disc and super audio players. Highly recommended.
Posted by Primavera at 4:02 PM No comments: 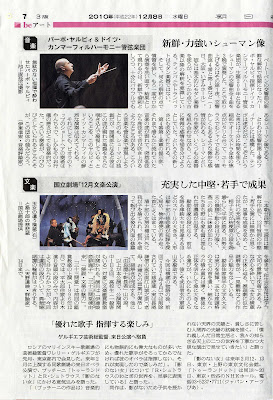 Posted by Primavera at 9:41 AM No comments: 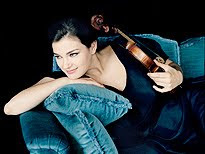 http://www.hr-online.de/website/rubriken/kultur/index.jsp?rubrik=37844&key=standard_document_40344501
Posted by Primavera at 9:38 AM No comments: 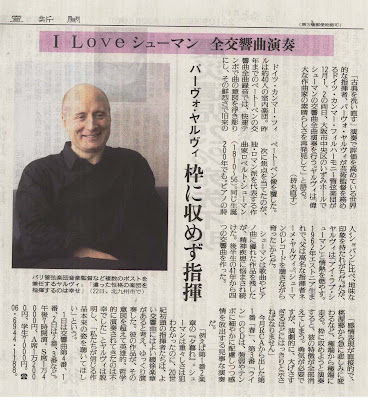 Posted by Primavera at 4:38 PM No comments: 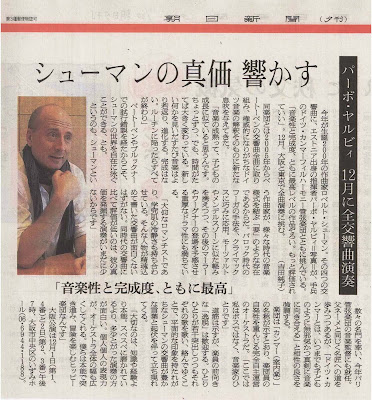 Posted by Primavera at 4:36 PM No comments: 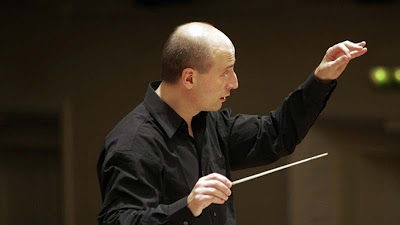