Frankfurt Radio and Paavo on tour in Japan. 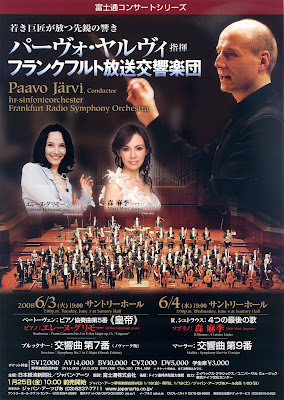 Posted by Primavera at 10:14 PM No comments:

Posted by Primavera at 11:25 PM No comments: 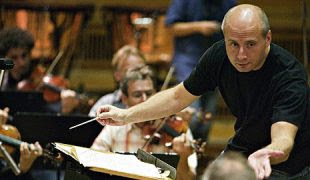 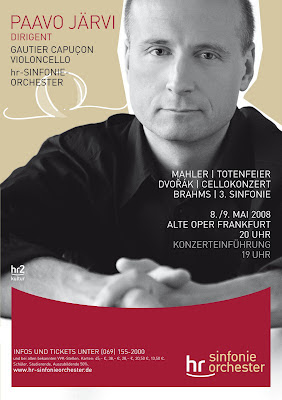 Posted by Primavera at 11:42 PM No comments: 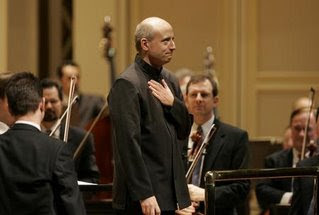 Paavo Järvi reacting to audience at Music Hall
May 3, 2008

“The Rite of Spring” as chamber music?
It wouldn’t be that much of a stretch to call the Cincinnati Symphony Orchestra's performance of Stravinsky’s revolutionary work chamber music Friday night at Music Hall. Led by music director Paavo Järvi, it was chamber music -- in quality, at least -- for each strand of its complex, shifting textures was clearly focused and one heard voices that often get "smudged" into the mix. Whether hearing a half-dozen instruments or over 100, one got the feeling of “seeing” into the work.
Järvi set it in high relief. He made it huge, as in the fortissimo maelstrom at the end, where the "Chosen One" (the usual lucky virgin) is sacrificed to appease the gods of spring (fertility). And where called for, he made it very small -- as in the impossibly soft passage for muted horns at the end of the introduction to part II ("The Sacrifice").
Evocative highlights were keenly observed, like the antique cymbals in "Augurs of Spring" ("Dances of the Young Girls") in part I and the soft tambourine in "Ritual Action of the Ancestors" in part II. Colors throughout the half-hour work were vividly drawn. The divided violas were lustrous in " Mystic Circle of the Young Girls" (part II). By contrast, the strings were rough and brutal on the repeated hammer blows that begin "Augurs of Spring."
Solo work was superb. CSO principal bassoonist William Winstead gave a shapely, sinuous sound to the bassoon's famously high opening incantation, and his virtuosity was followed throughout the ranks of the orchestra. Järvi, who drew applause during his screened "First Notes” preceding the concert for saying he is not feeling "a seven-year itch" in Cincinnati -- gave it a sense of unfolding drama. The earth came alive in part I, with woodwinds conjuring earthworms pushing through the soul and vines beginning to sprout. Obsessive horn calls and snatches of melody (some based on actual Slavic folk songs) led to an excruciating climax, then a kind of run for the safe house in the concluding "Dance of the Earth."
Part II began slowly and softly, like ink spreading in the water, topped by a spooky high violin motif. The music took on iridescent colors as it moved relentlessly toward the sacrificial dance. Slinky sounds on English horn and alto flute (later bass trumpet and alto flute) gave way to a dance of doom with cold, sharp slashes of trumpet amid constant changes of meter. Needless to say, timpanists Patrick Schleker and Richard Jensen had plenty to do, as did David Fishlock on bass drum.
(Speaking of "lustrous" violas, three members of the CSO viola section were recognized at the concert. Mark Cleghorn, Joe Somogyi and Ray Stilwell retire this season, a full 25 percent of the section! Also retiring is CSO president Steven Monder, who has served the orchestra for 37 years. Bravos to all.)
Järvi and the CSO have recorded "Rite of Spring" for Telarc and copies were available for sale at intermission, as was "The Igor," a delicious Baba Budan concoction of coffee, kahlua (or amaretto) and whipped cream.
Soloist for the concert was German pianist Lars Vogt, a superb classicist who gave both finesse and power to Mozart's Piano Concerto in D Minor, K.466. He cut through the Concerto's dark, foreboding opening like a ray of sunshine, manifesting both clarity and precision. The Romanza contrasted serene, childlike simplicity with passion -- nothing, however, out of proportion -- while the finale fairly sparkled. (Hear Vogt in works by Brahms and Schubert at 4 p.m. Sunday on the Linton Chamber Music series at First Unitarian Church in Avondale.)
Ending the 2007-08 season right, Järvi and the CSO performed the world premiere of Cincinnati composer Robert Johnson's "prairyerth." As Johnson explained in pre-concert remarks, he was inspired to write the eight-minute piece by William Least Heat Moon's 1991 book of the same name. Moon's book is an affectionate visit to the Flint Hills region of Kansas, the largest remaining area of tall grass prairie in the U.S. (“prairyerth” is an antique geological term for the soils in that area). Johnson, retired director of the Gorno Music Library at the University of Cincinnati College-Conservatory of Music, is a native of Kansas, and there is affection is his work, too. It is not meant to be descriptive, he said, but to evoke feelings one might experience in that special environment.
It opened with a broad, sweeping melody in the cellos, kind of like an unbroken view to a far distant horizon. This was taken up by winds and harp, giving it a shimmering, "amber waves of grain" aspect. The prairie tall grasses in Kansas reach eight to nine feet tall, however, and there is darkness there as well. Johnson explores this aspect, too, and has shaped "prairyerth" with a hint of drama (again non-specific, though he referred to the hard life on the prairie in his pre-concert comments). There is a dark, chorale like theme for low winds, for instance, and considerable thematic development.
Copland, Roy Harris and the New England Classicists come to mind in "classifying" the work, which left one with the feeling that a serious statement had been made, perhaps to the effect that such places as Kansas' tallgrass prairie are rapidly disappearing in today's world.
Repeat is 8 p.m. tonight (May 3) at Music Hall. Hear Johnson in conversation with CSO assistant conductor Eric Dudley at 7 p.m. Tickets at (513) 381-3300 .
Posted by Primavera at 6:28 PM No comments:

CONCERT REVIEW: A season finale worth waiting for 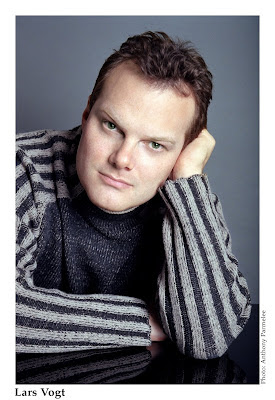 May 2, 2008
The Cincinanti Enquirer
By Janelle Gelfand
It was an explosive finale to the symphony season. The Cincinnati Symphony Orchestra’s performance of Stravinsky’s “The Rite of Spring” Friday night was more brutal, powerful and convincing than any in recent memory – including the orchestra’s recording of it a few years ago.
The musicians, who spent most of last month on the road, have never sounded so precise and yet also fearless. Stravinsky’s ballet, which caused a riot in 1913 Paris, still has the power to grip the listener today. On Friday, Paavo Järvi found its power in its primitive, explosive rhythms, which he propelled relentlessly, delivering a performance that was raw and larger-than-life.
“The Rite of Spring” concluded a program that opened with the world premiere of Robert Johnson’s “prairyerth,” a beautifully atmospheric piece evoking the Kansas prairie, and Mozart’s Piano Concerto No. 20 in D Minor, K. 466, with pianist Lars Vogt.

“The Rite” depicts the ancient pagan rite of a virgin sacrifice through mystical dances and barbaric rhythms. It is a showpiece for orchestra, and the expanded forces included brass arrayed across the back and two sets of timpani.
Järvi led the orchestra as if it were a life force, with often fast, driving tempos. The sinewy opening bassoon solo (William Winstead) unfolded into vividly chirping winds. Horns lifted their bells, timpani crashed, strings dug in, and staccato chords were given ringing cut-offs. It was as if the earth were opening up.
The musicians performed in bold, dramatic flourishes, and the winds especially shone in their mystical solos. At the other end of the spectrum, Johnson’s “prairyerth,” composed in 2006, was a rewarding opener. The title refers to the grassy prairies of the Great Plains. The piece unfolded like a miniature tone poem, well-crafted, with a stunning solo for trumpet before its luminous conclusion. It illustrated Johnson’s gift for melody as well as atmosphere, and its windswept flavor and majestic color sometimes recalled Sibelius. The audience approved, too. The Cincinnati composer, who was director of the library at the University of Cincinnati College-Conservatory of Music for 32 years, took a bow. For the centerpiece, Vogt gave a robust reading of Mozart’s D Minor Piano Concerto. The 37-year-old German pianist is one of a new generation of gifted young musicians, with immense ability and individuality. This was a reading that looked ahead to Beethoven – and perhaps beyond, given that the pianist wrote his own cadenzas. The D Minor Concerto has its share of brooding atmosphere, and Vogt cultivated a dark, dramatic sound, especially in the first movement, that was heavy and a bit austere for my taste. Yet there was much to admire in his thoughtful phrasing, control and the depths of sonority that he found in this music. His inventive first movement cadenza was something in the style of Beethoven, but with unexpected harmonic shifts. Vogt’s touch could be limpid and quite lovely, as it was in the slow movement, and the finale was a joy. Jarvi and the orchestra matched the pianist’s intensity and dark color. At intermission, the orchestra honored three musicians – all members of the viola section – who are retiring at the end of this season: Mark Cleghorn, a member of the orchestra since 1963; Joseph Somogyi, who joined in 1970; and Raymond Stilwell, a member since 1971. The audience gave them a standing ovation.Retiring president Steven Monder was also honored for serving 37 years with the orchestra, 35 as the top executive.
The concert repeats at 8 p.m. Saturday in Music Hall.
Tickets: 513-381-3300, http://www.cincinnatisymphony.org/
Posted by Primavera at 10:29 AM No comments: 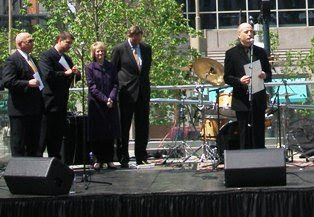 April 30, 2008
www.musicincincinnati.com
Here is a photo of Paavo on Cincinnati's Fountain Square acknowledging Mayor Mark Mallory's proclamation welcoming the Cincinnati Symphony Orchestra back from its tour of Europe.
By Mary Ellyn Hutton
Posted by Primavera at 10:23 AM No comments: