Long before becoming a Twitter phenomenon, Igor Levit has been recognised as a wonderful pianist and uncompromising artist, with a large sphere of interests, musical and otherwise. On Saturday, he played for the first time as soloist with the Berliner Philharmoniker in their Hans Scharoun-designed home, choosing Beethoven’s “Emperor” Concerto for the occasion. 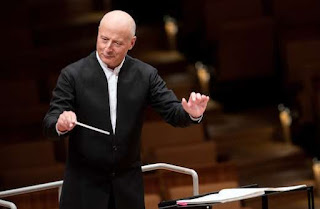 Photo: Monika Rittershaus
Levit is a huge believer in the communal power of music, involving both collaborators and listeners. As someone who repeatedly took upon himself, in recent months, the solitary task of traversing the full set of Beethoven piano sonatas, he seemed to be mostly interested here in the dialogue with the Berlin players. He appeared to glance at the musicians he was conversing with – horn players Stephan Dohr and Sarah Willis, clarinettist Wenzel Fuchs, bassoonist Daniele Damiano – as much as at Paavo Järvi, the evening’s conductor. Levit is not an artist to show off his technical prowess or to pursue interpretative novelties just for the sake of them. His playing perfectly balanced power and delicacy, without any hints of exaggeration. Pianissimos, trills, or tumbling semiquavers were exquisitely rendered, and his phrasing was glorious. Often smiling to himself, his joy listening to the sounds emerging from his fingers was palpable. In a concerto where the orchestra has clearly more than an accompanying role, Järvi adopted a measured pace, letting his musicians bask in the satisfaction unique to music-making.

Less well known than its immediate neighbour, the Fifth, in the composer’s symphonic canon, Prokofiev’s Sixth Symphony is considered by some to be his finest orchestral output. It has been viewed as both a paean to the sufferings of the Soviet people through the Second World War and an expression of the composer’s angst during the time of the so-called “Zhdanov doctrine” promulgating the principles of a “true” Stalinist art. The music is imbued with an emotional richness difficult to grasp on first hearing. Dissonant shrieks sit next to generous melodic snippets (such as the ones amazingly played by Principal Trumpet Guillaume Jehl in the second movement). Vaguely contoured spirits fly over precise rhythms as in Prokofiev’s ballet music. Gogol-like satire colludes with what could be attempts to characterise the Russian soul. The score not only requires a cohesive orchestra with extraordinary principal players, but also a conductor with a strong hand and a deep understanding of the circumstances in which the work was created. Paavo Järvi rose to the occasion.

He did not seek easy effects, but carefully constructed a firm structure, emphasising continuity. At the very beginning, a grotesque series of descending notes played by muted trumpets and then by trombones was immediately followed by a violin-intoned theme, full of melancholy and grief, as if it would have been the most obvious development. In the Vivace, instead of clearly delineating the contrast between forced public enthusiasm and the personal unease, Järvi gradually introduced the switch in mood, as if an unknown illness was steadily seeping in from all sides. At the end, all the merriment abruptly stops with a bassoon's murmur. After a caesura, the oboes reintroduce the first movement’s plangent and interrogative motif. In the last bars, the percussion rumbling and the brass directionless clamour sound more as a premonition of an earthquake than a victorious march. If one was looking for an illustration for Zhdanov’s slogan “The only conflict that is possible in Soviet culture is the conflict between good and best”, then this finale was certainly not one.
This performance was reviewed from the Digital Concert Hall live video stream.
https://bachtrack.com/es_ES/review-video-levit-jarvi-beethoven-prokofiev-berlin-philharmonic-march-2021
Posted by Primavera at 3:41 AM