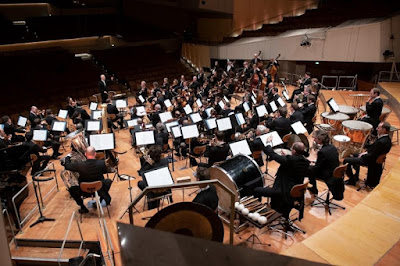 It seems right that (arguably) the greatest orchestra in the world has (unarguably) the best livestreaming and archive service. Thanks to a vital musicians’ Covid testing set-up, the Berlin Philharmoniker is even more supreme online now that it can field a full team for a work as opulently hard-hitting as Prokofiev’s Sixth Symphony, without distancing – pairs of string players share stands – even if also, still, without a live audience. The programming has been uncommonly interesting lately, with a "Golden Twenties" series featuring rich and rare repertoire, but even a one-off guest appearance (two-off if you include the repeat concert on Sunday afternoon) like this one from a front-rank conductor, Paavo Järvi, can be a bracing experience. An extra kick comes from the wonderful Igor Levit, hero (among other things) of 55 lockdown living-room concerts starting this time last year.

Bright comes before dark: this is a lithe, joyous Beethoven “Emperor” Concerto, only fitfully grandiose when the passing moment requires (as in the big rhythmic cannonades and octaves of the first-movement development). The orchestra under Järvi is as supple and winged as Levit (pictured below) in his solo passages, and this is that rare thing, a true concerto partnership. The pianist says in the splendid conversation with his conductor before the performance that he can actually take pleasure in what the orchestra’s doing while he ripples away arpeggio wise – the difficulty, he adds, being substantially less than comparable passages in Brahms’s First Concerto. You see it, to cite one of many instances, when the two horns (Stefan Dohr and Sarah Willis) float so artistically. It’s refreshing to have an Adagio which is genuinely un poco mosso. Each music lover will have his or her own idea of how this familiar music should go; some like it slower, but for me, this is the ideal.

What Järvi says, too, about Prokofiev in the interval is borne out by the shifting colours of a dark symphony to equal the monoliths of Shostakovich: always the element of surprise, of taking a turn you didn’t expect (a good pianist colleague of Levit’s, Boris Giltburg, made the same point about the composer’s elusiveness as compared to the more clear-cut progress of Shostakovich in my Russian music Zoom class last Thursday). The energy stops the tragic stretches ever being bogged down in self-pity; the Wagnerian drama of Prokofiev’s most astounding slow movement – it even quotes the “wound” motif from Parsifal, tying in with the composer’s own lost health after the Second World War – shines uncomfortably in that garish doubling of trumpet and first violins, but scales down to mellow, love-lorn horns and the toybox twinkle of harp and celesta.

The finale’s at first subtle underminings of a jolly pioneer galop accumulate with frightening speed towards the overpowering denouement. This is a work that ends on a chord of E flat major, but it’s the most devastating, surely, in any symphony. What a privilege to feel oneself back in the realm of the large-scale 20th century symphonic masterpieces again, though nothing will ever be as good as being there.
https://theartsdesk.com/classical-music/levit-berlin-philharmoniker-paavo-järvi-digital-concert-hall-review-optimal-light
Posted by Primavera at 3:57 AM