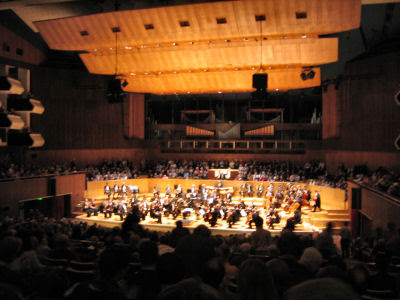 Dvořák’s joyous homage to Nature positively bristles with spirited melodies and snappy rhythms. Paavo Järvi and the Philharmonia Orchestra were full of bustling energy and precise ensemble. In fact, a little too fast and furious – Järvi giving few opportunities for the orchestra to relax. The quieter interlude portraying the tranquillity of the Bohemian woods was pushed a little forcibly but the main “peasant fair“ theme was suitably rumbustious.

Viktoria Mullova’s Brahms was a curious affair. Joining in the tutti before her first entry and using a score, which she often does now, the first movement seemed lacking in focus and direction. Her richness of tone and technical assurance is taken for granted but at times she seemed hesitant – especially when glancing at the score. Eye contact with Järvi was uncommonly close – as if they were both trying to agree on direction. The non-attributed cadenza was rather long but played with great assurance. The Adagio was better shaped and long-breathed with some felicitous details and sweetness of tone but there was some unwelcome coolness in Mullova’s playing leading to a feeling of detachment, a studied approach that carried into the finale despite much beauty of sound.

Tchaikovsky 5, though, was electrifying. The success lay in Järvi’s ability to appreciate the structure of this piece and which, in turns, was exciting, dramatic, lyrical and moving. The drama was never forced, the excitement never artificially pumped up, the Philharmonia Orchestra on absolute peak form. The tension never let up with Järvi going from movement to movement with barely a pause – bringing the welcome bonus of depriving us of between-movement coughing and spluttering.

The Andante cantabile was characterised by a sensitive horn solo from Lasse Mauritzen and some wonderfully ‘free’ playing from the first violins; the thunderous repeats of the fate motif were pushed home with terrifying certainty. The third-movement ‘Waltz’ found Järvi fully exploiting the dance element with delicately pointed dance-rhythms and playing full of colour and capped by a truly exciting finale, Järvi generating huge tension through perfectly judged tempos, building climaxes steadily. Tremendous!

http://classicalsource.com/db_control/db_concert_review.php?id=7098
Posted by Primavera at 12:03 AM No comments: 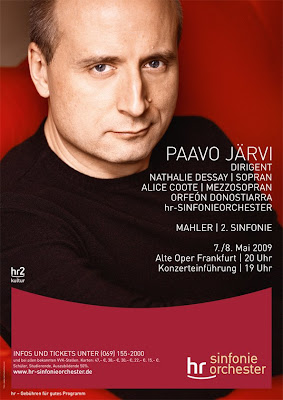 Posted by Primavera at 12:06 PM No comments:

CSO: Once More With Feeling 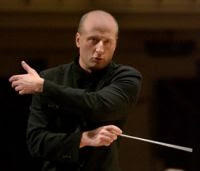 From the blog "Music in Cincinnati" on May 1, 2009 by Mary Ellyn Hutton
Thursday evening's Cincinnati Symphony concert at Music Hall was about feelings: the young, heart-on-your-sleeve kind, the older, retrospective kind and the kind a person might have in response to something new.
It seemed a well thought out way to close the orchestra's 2008-09 season. CSO music director Paavo Järvi, who has a flair for meaningful programming, conducted with plenty of feeling, too.
The three works on the program were Brahms' Piano Concerto No. 1, the Symphony No. 6 by Prokofiev and to open the concert, "American Overture" by Benjamin Britten in its CSO premiere.
Guest artist in the Brahms was pianist Nicholas Angelich -- not really a "guest" since Cincinnati is his hometown, but a kind of conquering hero. (The audience broke into applause when Jarvi mentioned him during his taped "First Notes" introduction, screened just before the concert began.)
Angelich, 38, son of CSO violinist Borivoye Angelich, left Cincinnati at 13 to study at the Paris Conservatory. In 2006, Gramophone magazine named him one of "Tomorrow's Classical Superstars."
Interestingly, it was a kind of reunion for Angelich and Järvi, who have performed together in Europe. They have recorded both of the Brahms Piano Concertos with the Frankfurt Radio Orchestra, of which Järvi is also music director. (The first disk, Concerto No. 1, is on sale at this weekend's concerts, with dual signing sessions by the two artists.)
Composed when Brahms was in his early 20s, it is impassioned music, full of complex feelings about his mentor Robert Schumann, then beginning to succumb to mental illness, Schumann's wife Clara with whom Brahms was in love, and his own burgeoning career.
Järvi opened it with a stab of emotion, the orchestra, bristling with trills and on-the-cusp drama. Angelich entered in a deeply human voice, expressive of both power and lyricism, clothed in a startlingly radiant tone that projected cleanly through the texture, giving affective shaping to his ideas. Never has the dramatic opening theme been so distinctly and passionately stated as by Angelich during the recapitulation, nor has the orchestra sounded so warm and responsive (kudos to the French horns).
The Adagio was very slow and tender, with lovely soliloquizing by Angelich. The melting, Schubertian second theme unfolded with gorgeous inevitability in the clarinets. Overall, it had a prayer-like effect, including a lovely benediction at the end by principal violist Victor de Almeida.
There was a lot of pent up energy going in the Rondo finale, where Angelich and Järvi worked hand in glove to achieve seamless ensemble. After a brief, bravura cadenza, the Concerto built to a majestic ending. The ovation, both for Angelich and Järvi, was long and loud.
Prokofiev's Sixth Symphony could be called his "tragic" symphony. But as in so much music produced during the Soviet era, serious (subversive) feelings like that had to be kept under wrap. Prokofiev, who returned to the Soviet Union after having enjoyed a brilliant career in the West, tried to "get along" but ultimately could not (he was condemned during the infamous 1948 chastisement by the Soviet censors).
His three-movement Sixth Symphony, which was expected to be another heroic wartime symphony like his Fifth, came just six years before his death. Disillusioned by then, he produced a work that contrasts apparent good cheer with its exact opposite. Prokofiev's favorite mask was sarcasm and it drips, sometimes heavily, here.
The lower brass are often the "villains," as in the snarly beginning of the first movement, where the CSO trombones and tuba joined the lower strings in setting a petulant background for the meandering, forlorn-sounding theme heard initially in muted violins. The theme grew impatient, then aggressive as the movement progressed. There were rude bumps by the piano and brasses interrupting the melodic flow and then a bitter march ending in a kind of soft wailing by the horns. It went on like this, giving one the feeling of a carnivorous animal closing in on an unsuspecting village.
Abject terror took hold at the beginning of the second movement with a huge dissonant chord, shrieking winds and bass drum rolls. There was masterful irony in some of the orchestral doublings (like violins and tuba) and the mood became more reflective. But never for long and there was a "doomsday clock" passage with woodblock against a galumphing CSO. Michael Chertock moved from piano to celesta, helping cast a glimmer of light with harpist Gillian Sella, but one still felt like a vise was closing.
Prokofiev decided to "laugh it off" in the Vivace finale (sort of), Principal clarinetist Richard Hawley gave it the necessary bite, and there was a comedic aspect to the recurrent, rhythmic tattoos heard in the timpani, lower strings and piano. A jaunty scene from Prokofiev's "Romeo and Juliet" came to mind, but the jig was up when the forlorn first movement theme was sounded by Dwight Parry and Lon Bussell on oboe and English horn. There were various grisly sounds (tremolo strings playing on the bridge), shrill, strained high notes and then a juggernaut to the end, which Järvi gave an energetic flourish.
Britten had a senior moment sometime in the 1970s when shown the score of his 1941 "American Overture." He didn't remember writing it, he said, but no wonder. Though commissioned by Artur Rodzinski and the Cleveland Orchestra, it was for some reason never performed. The premiere took place in 1983 in Great Britain (by the City of Birmingham Orchestra led by Simon Rattle). It is a very happy work, however. Just ten minutes long, it has a Coplandesque feeling, with violin “fiddling” and "Rodeo" like moments, even a brass mini-chorale, with chimes and a stately little march with timpani to the end. One got the feeling that Britten liked it in the U.S.A.
http://www.musicincincinnati.com/site/reviews/CSO_Finale_Once_More_With_Feeling.html
Posted by Primavera at 10:54 AM No comments:

Brahms a magnificent finale to season 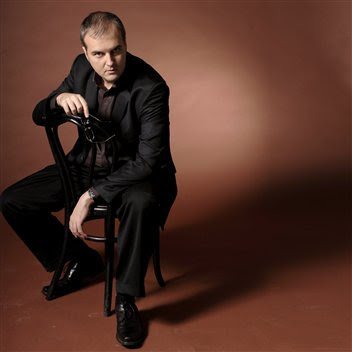 From Cincinnati.com on Thursday, April 30, 2009
By Janelle Gelfand
How rare it is to see a guest soloist at the Cincinnati Symphony Orchestra share the stage with his father, who is a member of the orchestra. On Thursday, “French” rising star Nicholas Angelich returned to his hometown to perform Brahms’ Piano Concerto No. 1 in Music Hall. With his dad Borivoje Angelich playing in the violin section as he has since 1965, the younger musician delivered a performance that can only be described as inspired.
Conducted by Paavo Järvi, the orchestra’s final concert of the season had other rarities which were equally rewarding, notably Prokofiev’s Symphony No. 6.
Nicholas Angelich left Ohio at age 13 to study in Paris, and returned to the U.S. to win several prestigious piano competitions. Although he has performed with the CSO, the New York Philharmonic and the Atlanta Symphony, he has built his career mainly in Europe. His recent recordings of Brahms are especially fine.
So it was a treat to hear him play Brahms’ D Minor Concerto, one of the most emotional masterpieces this composer ever wrote. It weighs drama and turmoil against enormous lyrical beauty, and pianists may be tempted to tackle it with too much bombast.
Yet Angelich’s view was heartfelt and genuine. He communicated a profound understanding for Brahms’ noble themes, playing with depth, warmth and a sonorous tonal palette. His technique was effortless, and he summoned plenty of power in the peaks.
The beauty of his touch was something to behold in the slow movement, and each phrase was deeply felt. The finale was adrenalin-charged, yet he communicated its romantic mood with great sweeps of color and lyricism.
Järvi and the orchestra made excellent partners, adding warmth and spontaneity. The horn calls (Tom Sherwood) added magic to the first movement.
Although Prokofiev’s Symphony No. 6, which concluded the program, is not as popular as his Fifth, some believe it is his greatest symphony. Written in 1947, it was the composer’s statement that despite Soviet victory, no one escaped World War II unscathed.
It is a remarkable piece. From the first note, Järvi led an intensely powerful, driving reading of this haunting music, which seems to wear emotion on its sleeve. It was rich with Prokofiev’s sudden harmonic turns and melodies, but also had a grotesque undercurrent, which Järvi emphasized relentlessly.
The orchestra performed with polish, from clipped, staccato themes in winds and brass to the powerful, all-encompassing sonority of the strings in the “Largo” movement. After the first two searing movements, the gay finale, a “Vivace,” was a stark contrast. Still, Järvi led with such fierceness and such a frenzied tempo, that the tension never let up.
The program opened with the CSO’s first performance of Benjamin Britten’s “An American Overture.” It was not as cleanly played, and its disjunct parts didn’t add up to a whole.
http://news.cincinnati.com/apps/pbcs.dll/section?category=PluckPersona&U=f75fdc4d7dde411d8044ca0ea924f0ae&plckController=PersonaBlog&plckScript=personaScript&plckElementId=personaDest&plckPersonaPage=BlogViewPost&plckPostId=Blog%3af75fdc4d7dde411d8044ca0ea924f0aePost%3a578f2999-6558-4982-924e-33ec4efc1987&sid=sitelife.cincinnati.com
Posted by Primavera at 10:49 AM No comments: