Posted by Primavera at 6:32 AM No comments: 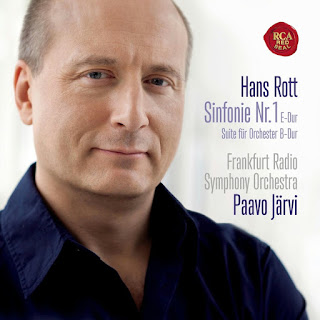 The Symphony by the unfortunate and short-lived Hans Rott (1858-1884) didn’t get its first performance until more than a century after its completion in 1880; but unlike so many similar rediscoveries, it is more than a curiosity and has not sunk again into oblivion. No, it’s not a concert favorite, and is unlikely to be. But it has done surprisingly well on CD: This is at least the sixth recording since Gerhard Samuel’s pioneering account with the Cincinnati Philharmonia, the crackerjack student orchestra from the University of Cincinnati that premiered the work.

Granted, Rott’s magnum opus has come in for more than its share of criticism. While its foreshadowings of Mahler are widely recognized (including by Mahler himself, who famously dubbed Rott “the founder of the New Symphony”), a few naysayers have insisted that we find similarities simply because, as Tony Haywood put it in a review of the Dennis Russell Davies recording on MusicWeb-International , Rott was “a talented composer coming from the same ‘stable’ as Mahler, and sharing the same tradition and lofty ideals as to how symphonic form should progress.” (David Johnson, who likes the symphony quite a bit, and whose excellent review of the first recording in Fanfare 13:4 gives an informative account of the piece and its history, makes a similar claim. The Mahlerian moments, he says, “are best explained precisely as Mahler explained them: both men were nourished by the same Zeitgeist .”) Some have been put off by the work’s apparent awkwardness—Rott never did get a chance to hear it, much less revise it, and in places it shows. David Hurwitz, writing in Classics Today , sniped “whether or not Rott did some of these things first hardly matters because everyone else did them better.”

So what does it sound like? Does it really sound like Mahler? Depends on what you mean by “like Mahler.” Certainly, the thematic premonitions of Mahler’s scores are hard to ignore—not only the first two symphonies but the Fifth as well, especially in the third movement. On the other hand, in terms of color and surface spirit, it’s not especially Mahlerian, except in the Scherzo, which, had it been written after the Mahler First, would surely be accused of plagiarism. And yet, on a deeper and more abstract level, the work looks ahead to the Mahler of the Seventh—not so much in its colors or its specific gestures and harmonies, but in terms of its formal, harmonic, and rhythmic dislocations, dislocations that are doubly effective because, on the thematic level, the work is so carefully unified.

Yes, the symphony looks back as well as forward: As we might expect of a young Bruckner pupil writing at the time, there are lots of reminiscences of Bruckner, Wagner, and the early German Romantics. Many—allegedly including even Brahms himself—perceive a lot of Brahms in the finale, too. It doesn’t sound that way to me: Despite the thematic nod to the finale of the Brahms First—actually, less glaring than Mahler’s borrowing at the opening of his Third—the voice is pretty far from Brahmsian. But in any case, the moments of late-Romantic lingua franca are overwhelmed by Rott’s willingness to go against the grain, to shift direction, to throw in the unexpected gesture, to engage extreme dynamic surprise—and his willingness to push his ideas to the limit. There are a few moments in the first movement that briefly look ahead to the Ives Second—leading us to wonder in what directions his talent might have led him. Not a symphony for those who like their music well mannered, perhaps: But for all its immaturity, it’s a heady work of real genius.

Until now, the Samuel and Leif Segerstam recordings have been widely considered the frontrunners in this symphony. Of the two, I’ve always preferred the Samuel—to my ears, Segerstam’s weighty and Brucknerian version buries Rott’s quirky spirit and exaggerates his redundancies. But Paavo Järvi’s performance tops them both, catching the music’s quicksilver with unmatched dexterity. His tempos are fast, yet in his hands, Rott never sounds rushed. Exuberant, yes, and youthful, and extroverted, and (considering the misery of his life) bizarrely self-confident; but never rushed. To add to the pleasures of the disc, the orchestra plays not only with panache, but with sensitivity as well (try the treatment of the distant chorale at the end of the second movement).

RCA’s release is made all the more welcome by the inclusion, in a performance edition by Johannes Volker Schmidt, of the two more-or-less extant movements from a planned four-movement Suite, composed even before the symphony. The richly contrapuntal conclusion (apparently marked simply “Last Movement” in the score) is especially effective: Heard out of context, you might momentarily think of Reger, except that Rott has a kind of zip that Reger rarely attained. A welcome addition to the catalog. 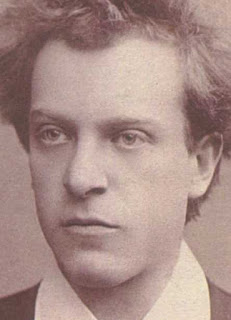 Hans Rott (1 August 1858 – 25 June 1884) was an Austrian composer and organist. He studied organ with Bruckner and Bruckner said that Rott played Bach very well, and even improvised wonderfully. Rott completed on one of his symphony before he sank into depression and died of tuberculosis in 1884, aged only 25. Mahler wrote of Rott as the "Founder of the New Symphony".
https://en.wikipedia.org/wiki/Hans_Rott 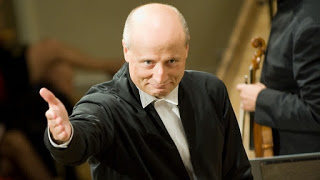 Paavo Järvi (born 30 December 1962 in Tallinn, Estonia) is an Estonian-born American conductor. He is the eldest son of conductor Neeme Järvi. Paavo Järvi served as principal conductor of the Frankfurt Radio Symphony Orchestra from 2006 to 2014. He is currently the music director of the Orchestre de Paris. Järvi has recorded for several labels and won a Grammy.
https://en.wikipedia.org/wiki/Paavo_J%C3%A4rvi

Posted by Primavera at 6:21 AM No comments: