http://mobil.morgenpost.de/printarchiv/kultur/article134485107/Ein-Mozart-ohne-Operneffekte-ohne-derbe-Spaesse.html
Posted by Primavera at 5:25 AM No comments:

http://m.tagesspiegel.de/kultur/paavo-jaervi-dirigiert-die-staatskapelle-keine-weiteren-fragen/10997330.html
Posted by Primavera at 5:23 AM No comments:

http://www.br.de/radio/br-klassik/sendungen/leporello/cd-tipp-04112014-paavo-jaervi-dirigiert-beethoven-overtueren-100.html
Posted by Primavera at 5:41 AM No comments:

english.cntv.cn
CCTV.com
02/11/2014
Beijing Music Festival presents unique and quality works in the Chinese capital every year. This year, celebrating the 150th anniversary of the birth of Richard Strauss, the festival closed on Friday with a tribute to the late German Romantic composer.
"Thus Spoke Zarathustra," the opening theme kicked off the concert with Orchestra de Paris under the baton of Paavo Jarvi. Immediately, it filled the concert hall with infinite space. In this symphonic poem, Strauss hopes to depict humanity not in search for eternity, but rather struggling to transcend  religious beliefs. Yet in the process, the music seems to discover something even more powerful.

Beijing Music Festival closed on Friday with a tribute to the late German Romantic composer.

"Thus Spoke Zarathustra," the opening theme kicked off the concert with Orchestra de Paris under the baton of Paavo Jarvi. 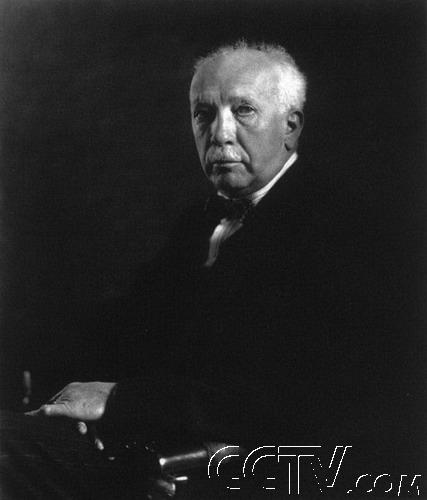 German composer Richard Strauss
Richard Strauss was one of the most versatile and talented composers of his generation, equally at ease in the concert hall, recital hall, ballet, cinema, and the opera house. His artistic career spanned nearly eight decades, and he composed in virtually all musical genres.
"Burleske" in D minor for piano and orchestra was composed in 1885. Meant to demystify the symphonic medium, the composer juggles with the piano and orchestra as if they were light as feathers.
"Strauss was a very passionate composer, a brilliant writer, orchestrator. He wrote very sensual, passionate and refined music. He's best known for his operas, his symphonic poems, there are also some chamber music and of course many songs. For the Piano he didn't write that much. This is a yong piece, and I think  this is a special piece. You can already see the brilliance of his musical personalities," says Nicholas Angelich, a pianist.
Born in the US in 1970, Nicholas Angelich began studying the piano at the age of five with his mother. At the age of seven, he gave his first concert with Mozart's Concerto number 21 in C Major, K. 467. Eight years later, he entered the Conservtoire National Superieur de Musique in Paris, where he has lived for over thirty years. Touring frequently around the world, Angelich says.
"Everthing in your life influences you as an artist. In a way that's very good. Sometimes, it's very difficult to live like that but it's something we always have to learn and try to develop. After a while, you feel like a gypsy, which is not bad, but you have to try to find your own truth," he says.
Now in its 16th year, the annual Beijing Music Festival brings leading artists in classical music to the Beijing stage, while also hosting master classes, community outreach concerts and community and education activities. And it's drawn many fans who are serious about classical music.
"Richard Strauss's music is not widely performed in China, so I really wanted to see it in concert," says a woman.
"I used to be an opera singer, so for me this is not my repertoire to sing, but it's my repertoire to love," says a man.
While the Chinese audience has seen hundreds of performances of Beethoven, Mozart and Wagner, few are familiar with the works of Richard Strauss. The Beijing Music Festival hopes that this closing concert dedicate to Richard Strauss will not only please the audience but educate and inspire them as well.

It’s a puzzle, isn’t it, this symphony? When we think of Beethoven, we always think of music with great depth and profundity. So is it really possible that, after his Seventh Symphony and before his Ninth – those great, epic works – such a genius could write a ‘little Classical symphony’? It looks and sounds like some kind of a joke and that’s exactly what I think it is. It’s the joke of a great genius. It is Beethoven, after all, but you cannot treat it like those other works, because he is taking an unexpected step in an unexpected direction. It is completely wrong to try and play this piece in the style of the Ninth. I have realised that to apologise in any way for the sudden change of character and quirkiness of this piece would diminish it. There are still so-called Beethoven ‘specialists’ who are trying to find profound, inner meaning in this symphony. So far as the tonality of the piece is concerned, it shares a key signature with the Pastoral Symphony, but, if there is any profound connection between the two works, I cannot find it.

In symphonies such as the Seventh and the Ninth, there can be a certain leeway to hide behind certain Romantic and expansive gestures. Not so with the Eighth. This is a wonderful little gem, but you do encounter in it technical and musical challenges. It’s not a piece that works unless everyone is convinced about the common interpretation. The direction must be agreed. You need an orchestra that possesses extreme virtuosity, which is also convinced about a shared approach and interpretation. Otherwise the piece will appear clumsy, out of breath, endlessly speedy – or just messy. It’s a great challenge and, in my relationship with this symphony, I feel my journey is never complete. Along with Schumann’s Symphony No 3, I find this symphony to be one of the hardest pieces in the repertoire to start. I always ask the musicians to be ready to play when I am still backstage, so we can begin the instant I arrive on the podium. It’s a practical thing. It’s essential to capture as much energy as possible in that first phrase.

‘He was deaf, but he was not stupid. He knew how to work a metronome’

If you study Beethoven’s metronome markings, you learn to treat ‘adagio’ in a less literal, more conceptual, context. In fact, the key to this piece as a whole has been to put trust in Beethoven’s metronome markings. He was deaf, but he was not stupid. He knew how to work a metronome. There are so many interesting and important details and it requires remarkable agility to capture the speed, the nuances and the colours. It then follows that you cannot play this piece with a large symphony orchestra. Even with a smaller group it is difficult, which is why I will conduct this work only with orchestras with whom I have an established relationship. It’s not enough for them to ‘meet me halfway’. If the musicians are unwilling – or, more likely, unable – to play it with the necessary dexterity, the piece simply won’t work. They need a chamber music attitude, and that means adequate rehearsal time is essential too. To achieve the necessary lightness and precision, a shift in mentality is needed. If you focus just on beauty and slow the piece down in the style of music of the mid-20th century, you might gain certain, beautiful moments, but you will lose the piece. This is not about making a beautiful sound, but neither is it a matter of achieving cold precision.

I discovered the type of Beethoven in which I am now involved through Sir Roger Norrington, whom I regard as one of the great musical revolutionaries. None of us are in music because we want to change anything. It is simply that a lot of traditions don’t make sense. For me, the interesting and important process is not setting out to convince other people of anything: it is making the piece work for you, yourself. You must build a coherent form. I grew up in a conductor’s family; and my introduction to the symphonies of Beethoven came from recordings by Bruno Walter, Klemperer and Furtwängler. I first heard this music as incredibly Brahmsian, Romantic and beautiful. Performances by the old masters all treat the slower movements in particular with the ears and mind of someone who has already heard Wagner. There was a historic misunderstanding. The kind of slow movement we tend to expect from someone after Wagner simply didn’t exist in Beethoven’s time. If you listen to Bruckner, under the real Bruckner conductors such as Wand, Jochum or Harnoncourt, those slower movements too make more sense when they are not ritualised. When I first played a recording by Roger Norrington, at the beginning I thought there was something wrong with my machine. I was literally speechless. At first this approach seemed to me absolutely wrong, but at the same time exhilarating. Then I learned about ‘Historically Informed Performance’ and I am glad to say, we are very ‘HIP’ now!

Posted by Primavera at 7:13 AM No comments: