This is really like the good old days – a new complete Beethoven cycle on records!
Of course, Andreas Spreer also had several Beethoven symphonies pressed on LP for Tacet (each of which is also worth recommending), but now all nine are available in a high-quality box with a sturdy plastic slipcase. Inside are LPs which have been impeccably pressed by Pallas on 180-gram vinyl and a lavish, large-format 32-page booklet. In other respects as well, everything is of the very best quality. The distinguished Polyhymnia team around Jean-Marie Geijsen did the original ighresolution digital multichannel recordings and the editing. The stereo SACD mix –
outstanding, by the way – was not simply used for the analog master, however.
Instead, Ralf Koschnicke of the Duisberg audiophile label Acousence remixed the multitracks on the analog level. The press matrices were made by none other than Hendrik Pauler at Pauler Acoustics, in the studios of his father, Günter, also committed to absolutely superb sound. It was worth the expenditure. The awardwinning recordings, dating from 2004 to 2008, sound overwhelmingly good. Only the best SACD players (if any) can produce such a colorful sound – both consistently harmonic and discriminatingly dispersed. Such bounding dynamics, dazzling
precision, touching charm, radiant brilliance – even vinyl skeptics get teary-eyed here. The fact that Estonian conductor Paavo Järvi is also a trained percussionist is clearly audible in several rapidly pulsating, brisk movements. The fact that he has inherited a feeling for effects without sensationalism from his father, Neeme, is obvious from several thrilling sforzati and electrifying climaxes. And finally, the fact
that, in addition to all of that, he also has a fine sense for subtle nuances is impressively demonstrated, not only in the softest passages of the slow movements. Every bar makes clear how outstanding the 40 musicians of the Deutsche Kammerphilharmonie Bremen are. All in all, sensational!
http://diversevinyl.com/news.php?id=cff23f1796dca8edba945651617ab8a3
Posted by Primavera at 9:01 AM No comments:

http://www.tlz.de/startseite/detail/-/specific/Jaervi-und-seine-Bremer-nehmen-sich-Schumanns-an-140910094
Posted by Primavera at 9:15 AM No comments:

http://nachrichten.t-online.de/deutsche-kammerphilharmonie-plant-im-naechsten-jahr-76-konzerte/id_52421916/index?news
Posted by Primavera at 8:36 AM No comments: 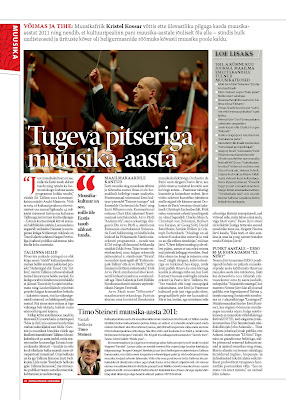 Posted by Primavera at 10:22 AM No comments:

http://archiviostorico.corriere.it/2011/novembre/27/Requiem_Faure_liquido_delicato_rarefatto_co_9_111127070.shtml
Posted by Primavera at 10:20 AM No comments: 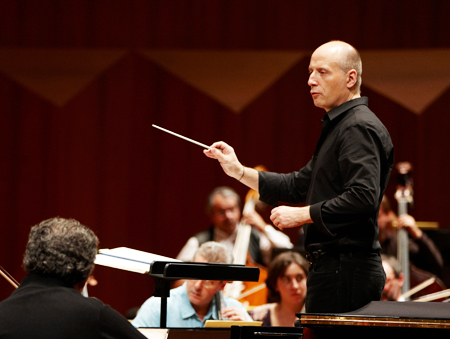 Conductor Paavo Jarvi leads the Paris Orchestra during a rehearsal at the Seoul Arts Center, Friday / Courtesy of Credia
Estonian-American conductor Pavvo Jarvi left the Cincinnati Symphony after a decade to fill some big shoes in Paris this year.
The position of music director at the “Orchestre de Paris” (hereafter Paris Orchestra) had been occupied by such greats like Herbert von Karajan, Sir Georg Solti and Daniel Barenboim.

The 49-year-old musician brought the top French orchestra to Seoul last week for two programs consisting of mostly French and Russian music. Jarvi chose music by two of the most revolutionary composers in classical music, such as Hector Berlioz and Igor Stravinsky.

The first program was performed Friday at the Seoul Arts Center, featuring “Fantastic Symphony: An Episode in the Life of an Artist in Five Parts” by Berlioz. A program symphony written in 1830, it is one of the representative pieces of the early Romantic period. It has been rarely staged here despite its huge popularity.

The following concert on Saturday was centered on Stravinsky’s ballet music “Petrouchka,” a story of a Russian traditional puppet composed in 1910.

Korean pianist Paik Kun-woo was the soloist, playing concertos by Schumann and Ravel.

The orchestra’s brass section was particularly explosive, mixed with gorgeous oboes and bassoons. The strings were dynamic and detail-oriented at the same time. During the Sibelius encore piece “Valse Triste,” the audience was awe-struck by the strings’ captivating pianissimo. After Bizet’s “Farandole” as the final piece of the Saturday concert, many in the audience rose to their feet.

What was most interesting to see was how Jarvi has achieved such close rapport with this orchestra in such short time.

During one of the curtain calls Saturday, the members declined to get up when directed by the Jarvi, so that their new music director would be the sole recipient of a roaring applause. They collectively stomped their feet, showing their affection for Jarvi who is to work with them until 2015.

The 49-year-old is a rare breed of conductors who are equipped with a total package — brilliant musicianship, exceptional conducting technique, strong leadership and star quality. He is said to be an open communicator with orchestra members.

In an interview with a French online classical music magazine (www.concertclassic.com) ahead of the concerts, Paik said Jarvi’s open-mindedness — he keeps the door to his rehearsal room wide open — is what spurs the high demand for him.

With these unique qualities, he made the Cincinnati Symphony the “Mecca of culture in the Midwest U.S.,” before leaving for Paris to focus on the Paris Orchestra this year. He already leads two other orchestras in Germany as well, making him one of the busiest conductors in Europe.

The two performances by the Paris Orchestra concluded a concert season marked by the visits of the cream of the crop ensembles, culminating with the visit of the Berlin Philharmonic in November.

Jarvi will be visiting Korea again in June 2012, with his Frankfurt Radio Symphony Orchestra for two performances of Mahler’s 5th symphony and collaboration with American violinist Hilary Hahn in Mendelssohn’s violin concerto.