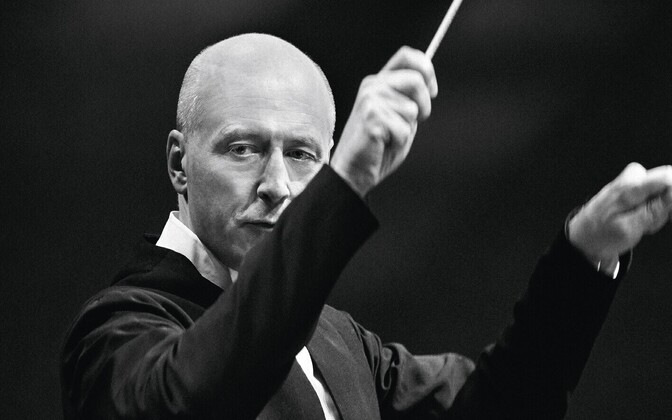 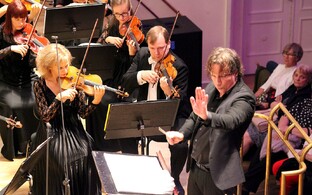 https://kultuur.err.ee/951364/paavo-ja-neeme-jarvi-dirigeerivad-jaapani-raadio-sumfooniaorkestrit-tokyos
Posted by Primavera at 8:41 AM No comments: 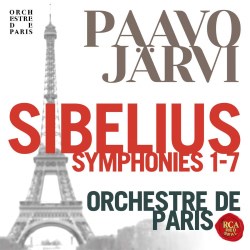 Charles Munch was the natural choice to assume a pivotal role when the French Ministry of Culture decided it was time to create a totally new orchestra. His was only a brief association, however, as he died unexpectedly a year after conducting the inaugural concert of the Orchestre de Paris in November 1967. I think it’s fair to say that the orchestra has had its ups and downs over the years since then, the latest of which is the announcement that Music Director Daniel Harding will be standing down after only three years. His predecessor was Paavo Järvi.

The orchestra’s main home for many years – notwithstanding more ups and downs – was the Salle Pleyel, but now it has taken up residence in the new Philharmonie, whose opening, in January 2015, was itself not without controversy. Symphonies 1, 6 and 7 in this collection were recorded in the Salle Pleyel, the others in the Philharmonie. These are live performances, and the engineering is superb. A few minor changes of perspective, almost imperceptible, suggest patching sessions that would also allow for the elimination of applause. The audience is pretty much silent throughout the set. The seven symphonies are conveniently arranged on three well-filled discs, and the set is further enhanced by two excellent booklet essays in English, French or German, one by the conductor and the other by Wolfgang Stähr.

The First Symphony opens with a satisfyingly explosive account of the first movement, with the Paris Orchestra brass in particularly fine form. The movement ends with a dry, pizzicato chord, but the conductor has clearly asked his harpist to allow the notes to continue to vibrate and die away naturally. The opening of the second movement provides a fine example of care with which these performances have been prepared, with the difference between piano and pianissimo finely differentiated by the first violins. It is perhaps in this music, as well as in the slow passages of the finale, that the influence of Tchaikovsky is most evident, in the instrumental colours employed, in the music’s melodic nature and, especially, in its harmony. All the passion and yearning are justly brought out by this team. In this movement, as in the following scherzo I noticed a few minor textual differences between the score used by the Parisian team and my trusty old Dover edition. This no doubt reflects the latest Sibelius scholarship. The pacing of the lively scherzo, and its slower central section, is perfectly judged by Järvi, and indeed his choice of tempi throughout the set is difficult to fault. In particular, the slower sections of the finale are beautifully broad, a perfect foil against the rather garrulous nature of the rest of the movement.

The first movement of the Second Symphony is urgent and forward moving in Järvi’s hands, who finds more drama and disquiet in this movement than many another conductor. The disquiet continues in the extraordinary slow movement, where Järvi manages to unify the disparate elements of the composer’s discourse with great success. Unity is also enhanced thanks to the conductor’s faultless control of the many tempo changes. The scherzo is taken at a real lick and leads into the glorious opening of the finale, more Allegro than moderato here. Bernstein, with the Vienna Philharmonic, takes nearly two minutes more over this finale, whereas Berglund in his fine Warner set with the Bournemouth Symphony Orchestra, takes half a minute less. It depends, really, on how you want to hear this finale; it can, in the wrong hands, take on an unpleasant element of bombast. But if you think Järvi might be underpowered for your taste you’d better think again. He even crowns his performance with a subito piano crescendo on the final chord, quite unmarked but undeniably effective.

Järvi explains in his booklet essay that no previous conductor of the Paris Orchestra had shown an interest in Nordic music. (I live near Toulouse, and that city’s outstanding orchestra, now conducted by Tugan Sokhiev, has performed very little Sibelius in the thirty years I have lived here.) How much at home, one wonders, do the string players feel when called upon to deliver those characteristic and ubiquitous Sibelius repeated figuration passages? A particular example occurs in the middle of the first movement of the Third Symphony. Is the long passage of semiquavers in the viola part accompaniment or an important and essential part of the texture? (Vaughan Williams, a huge admirer of Sibelius, and famous for admitting to ‘cribs’, uses a similar idea to accompany the solo saxophone in the Scherzo of his Sixth Symphony.) The Parisian viola section delivers this passage superbly, like an engine constantly turning. What a transformation took place in the five years between these two symphonies! We now have a composer absolutely sure of and true to himself, whilst the music itself is more enigmatic and inscrutable. I find this performance of the wonderful Third Symphony totally successful, right up to the extraordinary march that closes the work and seems to arrive from nowhere.

The performance of the Fourth Symphony is also highly successful. The lower strings really dig in to the opening gestures and the whole of the first movement receives a measured performance from Järvi. There seems no relief from the gloom until, suddenly, at about the 3½ minute mark, a chord of B major allows some light into the texture. There are several moments of slight consolation throughout the movement, but otherwise this is music that allows for no hope. The third movement appears constantly to be in search of some kind of resolution, and almost finds it, but the near-triumphant music for massed strings shortly before the close soon descends into further disillusion on repeated C sharps. The scherzo that might have let in some light, becomes obsessed with a singularly cruel melodic tag with which it closes, and the finale, like the slow movement, subsides into nothingness. This was the last of the symphonies to be recorded, and I cannot fault this Parisian performance. I don’t think Järvi puts a foot wrong, and the orchestra plays magnificently. There is a palpable feel of live performance here, but given that Sibelius is so little performed in France, even now, I do wonder what the audience, many of whom would be unfamiliar with the work, will have made of it.

Throughout this set, and in the Fifth Symphony in particular, listeners familiar with the works are likely to be surprised by previously unnoticed details that Järvi manages to bring out. This performance once again raises the question of whether the string figurations, so perfectly articulated here, are subsidiary to or form part of the thematic material. Overall, this is a powerful and bold reading of Sibelius’s masterpiece, the first two climaxes in the first movement urgent rather than broad. The transition between the first and second parts of this movement – or between the first movement and the scherzo if, like me, you prefer to hear it that way – is masterly here, but listeners might wish that Järvi had followed more closely the composer’s indications to accelerate. The slow movement is often an oasis of calm, but not here, not really. Järvi finds some nervousness, and even some violence in the more forthright passages. The finale goes extremely well, those string tremolando figures once again extremely accurate and clear. The horns are magnificent in their moment of glory, though when the same theme returns on the trumpets Järvi gives more prominence to the rocking two-note figure in the strings. Then, like most conductors – Rattle is an honourable exception – he doesn’t trust the composer on the final page, and shortens the precisely notated silences between the massive closing chords. This is the only one of these performances where Järvi’s view of the work is sometimes at odds with my own, but other listeners will decide for themselves.

Composition of the final two symphonies overlapped for quite some time, extraordinary when you contemplate how different they are. Ralph Vaughan Williams – a lifelong Sibelius admirer, to whom he dedicated his own Fifth Symphony ‘without permission’ – writing to Michael Kennedy in 1957, said ‘It took me some time to get accustomed to his No. 6, but I rather believe now that it is his greatest’. I’m not far off agreeing. And, great admirer of Britten as I am, I have no problem setting aside his regrettable comment that Sibelius must have been drunk when he composed the work. Sibelius said that, rather than cocktails, he was offering ‘cold spring water’. The clarity and purity of the thematic material and, especially, of the scoring, are admirably brought out in this fine performance from Paris, a city where one might more readily expect cocktails. Järvi’s approach is generally muscular, and that may not appeal to every listener, particularly in this piece where fragility is an important element. I have read other opinions of this performance, and also that of the Seventh Symphony, where this criticism is made. My reaction is not the same. In the Sixth, Järvi finds the fragility the music demands before it passes, as it frequently does, to something more forthright and emphatic. I do not find that Järvi overemphasises this aspect of the music. On the contrary, I hear an almost ideal balance. Järvi is urgent, once again, in the wonderful passage for strings that follows the introductory paragraph of the Seventh Symphony, pressing ahead more than many another conductor. But the Seventh Symphony is a miracle of integrated elements, and when one sees the work as a journey, or an arch – one struggles to find an image worthy of this masterpiece – Järvi provides a performance that justly achieves both coherence and integration. It is, also, a remarkably sonorous performance, the Paris Orchestra encouraged by their conductor to achieve both weight and beauty of tone.

The cycle of seven symphonies that Jean Sibelius left us is one of the wonders of art. Those devoted to the composer will no doubt be curious as to how a French orchestra under an Estonian conductor will sound in their favourite music. I can only encourage them to try. The orchestra plays magnificently and makes a glorious sound. A little Gallic timbre is evident from time to time, from the French-sounding bassoons, for example, and to which Järvi is keen to give some prominence. Otherwise, I have found these performances deeply satisfying and feel confident that most others will find likewise. 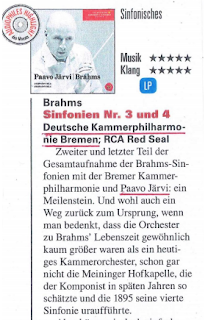 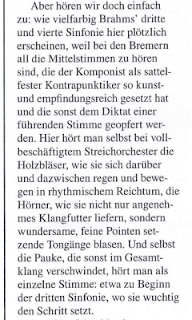 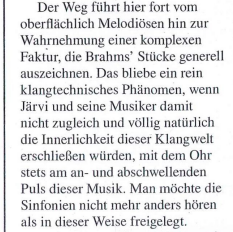 Posted by Primavera at 4:27 AM No comments: