Posted by Primavera at 6:59 PM No comments:

http://www.parnupostimees.ee/918206/jarvi-festival-toob-parnusse-300-muusikut-ule-maailma/
Posted by Primavera at 6:07 PM No comments:

Composer: Grieg
Repertoire: Peer Gynt Artists: Peter Mattei, Camilla Tilling, Charlotte Hellekant, Ellerhein Girls’ Choir, Estonian National Male Choir, Estonian National SO/ Paavo Järvi
Rating: 5/5
Genre: Instrumental
Label: Virgin 545 7222
'I’ve done something about the Hall of the Old Man of Dovre,’ Grieg declared in a letter of 1864, ‘and I literally can’t bear to listen to it, it is so full of cow-turds and Norse-Norsehood!’ Indeed, despite its extraordinary melodic freedom and freshness, Grieg’s incidental music to Ibsen’s play caused him endless problems, not least with the orchestration. Not only that but the two popular suites he later extracted present the music in a completely different order from the full original score, and perhaps most surprisingly of all the unforgettable ‘Morning’ is not set (as one might assume) in the fjords but  in Morocco!
Unless you must have absolutely every single note Grieg intended for Peer Gynt, this new, gloriously played and recorded account from Paavo Järvi (son of Neeme, whose fine complete version of the score on two discs remains available on DG) is a real winner. The magical sounds Järvi coaxes from the strings in ‘Solveig’s Cradle Song’, not to say Charlotte Hellekant’s skin-tinglingly pure singing, mark this out as a very special disc indeed. So too the head of steam Järvi builds up (with choir) in ‘The Hall of the Mountain King’, driving it towards a final shattering climax. Highly recommended.
http://www.classicfm.com/composers/grieg/album-reviews/paavo-jarvi-gives-griegs-peer-gynt-new-glorious-li/
Posted by Primavera at 5:07 PM No comments:

NHK Symphony Orchestra announced today the appointment of Paavo Järvi as its Chief Conductor from the start of the 2015/16 season.

The three year contract will commence in September 2015. In addition to concerts and broadcasts in Japan, a major international tour is being planned to present the new partnership. Paavo Järvi first conducted the NHK Symphony Orchestra in January 2002 and will next return to the orchestra in February 2015.

http://www.harrisonparrott.com/news/2012/07/paavo-jarvi-appointed-chief-conductor-nhk-symphony-orchestra?utm_source=HarrisonParrott+Publicity+List&utm_campaign=136a91de87-Paavo_NHK_annoucement7_6_2012&utm_medium=email
Posted by Primavera at 6:03 PM No comments:

Paavo Järvi Appointed as Chief Conductor From the 2015/16 season

NHK Symphony Orchestra (based in Tokyo and headed by Chairman Hidemi Hyuga) is pleased to announce the appointment of Paavo Järvi as its Chief Conductor from the start of the 2015/16 season.

The three year contract with Mr. Järvi will commence in September 2015. In addition to concerts in Japan, an international tour under its new Chief Conductor is being planned and is expected to raise the international reputation of the NHK Symphony Orchestra.

We hope that music lovers in Japan and overseas will look forward to experiencing this new era live in the concert hall as well as via television and radio.

Grammy award winning Paavo Järvi is now in his third season as Music Director of the Orchestre de Paris, a contract which has already been extended until the end of the 2015/16 season. Last season saw him touring to Asia with the orchestra with performances in Tokyo, Yokohama, Fukuoka and Miyazaki as well as Beijing and Seoul. He has been awarded the Chevalier de L’Ordre des Arts et des Lettres by Frédéric Mitterrand for his outstanding contribution to Music in France.

As Music Director of Frankfurt Radio Symphony Orchestra, Paavo Järvi has appeared with the orchestra in China, Taiwan and Japan, and at major European Festivals such as the BBC Proms, the Rheingau Musik Festival and the Robeco Summer series in Amsterdam’s Concertgebouw. He and the orchestra are currently in the process of recording all of the Bruckner symphonies for Sony, as well as a cycle of Nielsen symphonies.

Paavo Järvi has been the Artistic Director of Die Deutsche Kammerphilharmonie Bremen since 2004 and has received the highest public and critical acclaim for his concerts and recordings of Beethoven’s Symphonies, all of which have now been released on Sony. He received the 2010 ECHO Klassik Conductor of the Year Award for Symphonies Nos. 2 & 6; Symphonies Nos. 3 & 8 and won the prestigious Annual German Record Critics’ Prize for 2007. They have now performed the complete Beethoven Symphonies cycle at the Théâtre des Champs-Elysées, Beethovenhalle Bonn, Salzburg Festival and at the Warsaw Easter Festival. The orchestra are now embarking on a similar path with the complete Schumann symphonies.

In the 2010/11 season, Paavo Järvi completed a highly successful tenure as Music Director of the Cincinnati Symphony Orchestra, leaving behind him a legacy of extensive touring and a discography of sixteen CDs for Telarc. In recognition of his work for the orchestra, he has been appointed Music Director Laureate.

Since the start of his career, Järvi has made it a priority to champion works by contemporary Estonian composers including Arvo Pärt, Erkki-Sven Tüür, Lepo Sumera and Eduard Tubin. He is also Artistic Adviser to the Estonian National Symphony Orchestra and Järvi Summer Festival in Pärnu.

As a guest conductor, he regularly performs with orchestras such as the Royal Concertgebouw and Philharmonia orchestras, Wiener and Berliner Philharmoniker, Dresden Staatskapelle, New York Philharmonic, The Cleveland and Chicago Symphony orchestras.
http://www.nhkso.or.jp/news/1325/
Posted by Primavera at 6:03 PM No comments: 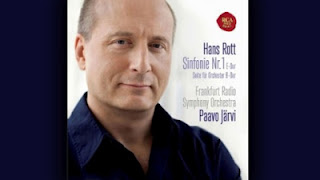 Kai Luehrs-Kaiser, kulturradio
http://www.kulturradio.de/rezensionen/cd/2012/hans_rott__sinfonie.html
Posted by Primavera at 8:35 AM No comments: