Back in 2012, towards the end of his Frankfurt RSO tenure, Paavo Järvi showed his broader Tchaikovsky hand with a particularly appealing account of the vernal First Symphony. Combining Germanic underlay with Russian fantasy, muscular orchestral textures with solo cameos and chamber offsets, sentiments of different shades, it wasn’t Tchaikovsky in the throaty, gravelled, all-guns blazing Svetlanov or Gergiev mould. But it had plenty going for it, a mixture of northern moods, sunsets and nights, lyric song and balletic embrace, reminding us quietly that the same waters of the Gulf of Finland link Tallinn, Järvi’s birthplace, with St Petersburg scarcely five hours northeast.

Just over a year ago Järvi was appointed Chief Conductor and Music Director of the Tonhalle-Orchester Zürich – a challenging Diapason d’Or Messiaen release launching a deal with Alpha. Now sees the start of a new Tchaikovsky cycle promising culture and class before crassness. As a concert these same forces undertook in Vienna last January showed [https://www.classicalsource.com/concert/tonhalle-orchester-zurich-paavo-jarvi-in-vienna-bela-bartoks-dance-suite-and-pyotr-tchaikovskys-fifth-symphony-martin-frost-plays-aaron-coplands-clarinet-concerto-live-webcast/], the style and substance of the Fifth Symphony is ingrained in their DNA. Big dynamic range, hard yet cushioned tuttis, warmly lyrical contrasts, beauty of sound and detail at a premium, structure and theatre hand in hand. Opting for the large-scale overview, letting facets glint the horizon that others underplay or take too easily for granted, is part and parcel of Järvi’s mature language these days. Conscious that shaded brushstrokes will often say more than bright stage lighting, he doesn’t need to over-act a story to get the message across.

Typical touches abound, small in themselves perhaps but catching the ear. The closing hairpins of the first movement, for instance, increasing then easing the dynamic; the bassoon rubato (taking a hint from the ‘solo’ marking of the score) and string accents at the end of the (tenderly caressed) Valse; the snarling, roaring timpani crescendoleading into the allegro of the Finale, a single bar of compelling brilliance. In performance and recording terms, there are plenty enough soundbites to recommend this version. The Finale for one: splendid in every way, the orchestra exultant, relishing the pulse and splendour of the occasion, rising as one to Järvi’s needs and nuances. The Andante cantabile for another: not just the contouring of the horn tune and its continuation but the refinements of accompaniment and phrasing, the darker recesses of timbre, the structuring of climaxes, the refusal to let events drag. Notwithstanding the Tonhalle’s reference recordings under David Zinman, Music Director from 1995 to 2014 (Strauss and Mahler in particular), this is interpretation, playing, production and sound engineering on an epic, eloquent scale. Byronic Romanticism.

In the tradition of the Liszt tone poems, and Tchaikovsky’s own, earlier and later, Francesca da Rimini, after Dante (1876), is a bold drama, a tragic fate ‘opera’ for orchestra in three idée fixe referenced acts with Vorspiel, played without a break. The finest conductors have tackled this showpiece. It separates the men from the boys. Suffice that Järvi’s is a reading up there with the greats. He sets the bar high. “One Hell of a performance” deems a colleague, verging on understatement. The tension is volcanic, the whole sweep and panorama a film spiralling deathwards, emotions and ‘Second Circle’ punishment laid bare. The music vents a phenomenal display of virtuosity and unanimity from the Tonhalle, across the board from visceral strings to fiery brass to the plaintive clarinet song of the central Andante. The electricity of the moment, the sense of infernal storms and Saturnian forces unleashed, of musicians taken over by dimensions beyond them, hits one fair and square.

Live through the seventy-four minutes of this disc, and you’ll reach the last seconds gasping, without words, drained by the intensity of the narrative. Heaven only knows what the players must have felt. Elated yet floored. Wiped out yet triumphant. Järvi at his best. 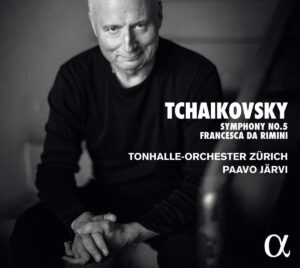 Posted by Primavera at 5:40 AM

Do you know where I can find a copy of his DVD with the Cincinnati Symphony with Tchaik 5, La Mer, Coleman's "Streetscape," and the Barber Adagio? I had a copy years ago, but it got lost, and I've never been able to find another one.