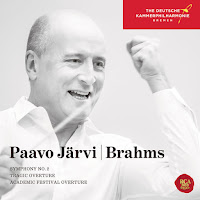 
Paavo Järvi and the Deutsche Kammerphilharmonie’s scintillating Beethoven cycle hasn't received the acclaim it deserves in the UK. Seek it out forthwith, and you'll feel compelled to invest in this first installment of their Brahms cycle. The orchestral sound is still pretty rich, the strings numbering over 30. Wind details emerge without effort, with principal flautist Bettina Wild a stand-out. Flexible tempi allow Järvi to really engage with Brahms's long opening movement; I like the urgency which he brings to the busy music early in the development. Perhaps the trombones could have been recorded with a bit more presence, but that's a minor quibble: the sublime coda is beautifully done. Järvi’s inner movements are exceptional, the Adagio non troppo solemn but fluid, followed by an Allegretto grazioso full of puppyish bounce.


It's capped by a rumbustious, upbeat finale, though Järvi’s players remember to find plenty of mystery in the crepuscular interlude five minutes in. Brahms's brassy coda blazes, the trombones’ D major chord ringing out. As couplings, we're given the Tragic and Academic Festival overtures. The latter gets a stand-out performance, with prominent contrabassoon and tuba. Excellent, in other words: here's hoping that subsequent volumes are as good.

http://www.theartsdesk.com/classical-music/classical-cds-weekly-brahms-granados-steven-isserlis
Posted by Primavera at 6:06 AM