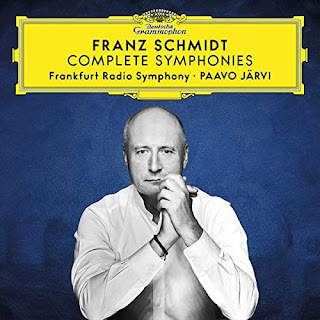 Paavo Järvi is following in his father Neeme’s footsteps who recorded Franz Schmidt’s Four Symphonies in Chicago and Detroit for Chandos. (Other complete Schmidt cycles are available.)

It’s wonderful repertoire, which the Frankfurt Radio Symphony now does proud, especially the absorbing masterpiece that is No.4 (C-major, 1933), introduced to most of us, I imagine, by Zubin Mehta’s 1972 Vienna Philharmonic LP (Decca SXL 6544), which has gone on to enjoy at least two CD transfers, music that has since been championed by such as Kirill Petrenko, Franz Welser-Möst and the late Yakov Kreizberg. It might be heard as a musically transformative work – it plays continuously (forty-five minutes from Järvi, Mehta adds a few more) and is bookended by a lonely trumpet solo (sensitively intoned by Balázs Nemes) – as well as autobiographical, so deeply expressive, nowhere more so than in the elegiac Adagio section introduced by a cello (Schmidt’s own instrument, here eloquently rendered by Peter-Philipp Staemmler, who is placed centrally given Järvi has the violins seated antiphonally, appositely) of some of the most-sublime, tear-jerking and transcending music ever written – beyond words and haunting the listener for a lifetime. From there to a lively Molto vivace section (reporting happier times, maybe) – I wonder on how many occasions I turned over Mehta’s LP at this point: CD of course allows no such fracturing of what is a cyclical one-movement structure – music that dances exuberantly while being contrapuntally exacting, leading to a tortured climax and a final part (cued here by notable Frankfurt horn contributions, solo and ensemble) that looks back – this is a Symphony in which everything connects.

Schmidt (1874-1939), Austrian if with Hungarian parents and born in what today is Bratislava, by profession an orchestral cellist in Vienna (he played for Mahler) and who was also a fine pianist – and an impressive composer.

The Symphonies that precede No.4 (which expresses Schmidt’s innermost feelings to an unsettling degree yet also giving solace) are no-less engaging.

No.3 (A-major, 1928), here coupled with the Fourth on an eighty-five-minute disc, opens in pastoral fashion and in a manner that reminds of Carl Nielsen. It’s an elegantly light piece, beautifully proportioned across four movements, the second being a rapturous Adagio, the third a perky Scherzo.

Symphony 2 (E-flat, 1913) is in three movements, the middle one an ingenious set of Variations that embraces a Scherzo and Trio. The first movement is optimistic and lucidly scored (despite the orchestra being large) whereas the Finale is initially slow – during which breezes waft and ultimately secure a full-sail homeward-bound conclusion, sonorous brass to the fore.

Schmidt’s debut Symphony (E-major, 1896), rich in romanticism and storytelling powers, has a superb first movement – grandiose, dashing, ardent (and an exposition repeat) –, a slow one of forest-murmurs and ecstatic beauty, then a Scherzo of rustic vitality, a lolloping waltz-like country-dance contrasted with a Trio of reverie. The Finale is an amiable affair formally attired, not least fugally, and which grows to a big finish.

Should Schmidt’s Symphonies be unfamiliar, they should appeal to admirers of the music of Bruckner, Mahler, Reger and Richard Strauss. Paavo Järvi clearly believes in their considerable worth and conducts them accordingly. Recorded between 2013 and 2018, the sound is very good if a little edgy in the loudest passages, but that is an insignificant caveat given the compositional and interpretative artistry on offer. DG 483 8336 (3 CDs).

Posted by Primavera at 2:13 PM