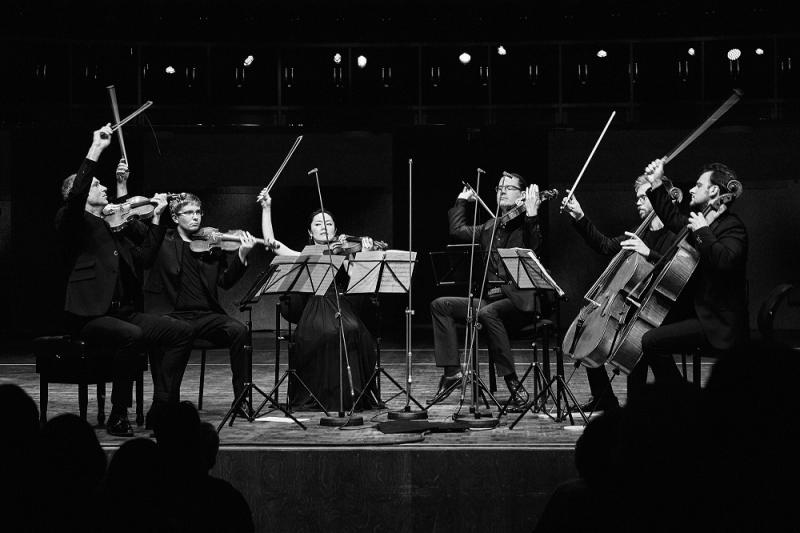 
Little has changed about Pärnu, with its concentric rings of eight-mile sandy beach and dunes, wooded gardens and wooden old town, in the five years I've been going there. It came as a bit of a shock to find that voters in the region favoured the far right, which now has an unwelcome white-supremacist father and son in an otherwise progressive parliament; but the town in July is full of Tallinn folk heading south to Estonia's "summer capital". It's still a calm background for the intense creative work of the music festival dominated by the Järvi family: Paavo, "Artistic Leader" with his phenomenal Estonian Festival Orchestra giving two concerts each season, father Neeme and now brother Kristjan also concertising and helping out with the Academy conducting course, sister Maarika playing flute in orchestra and ensembles. 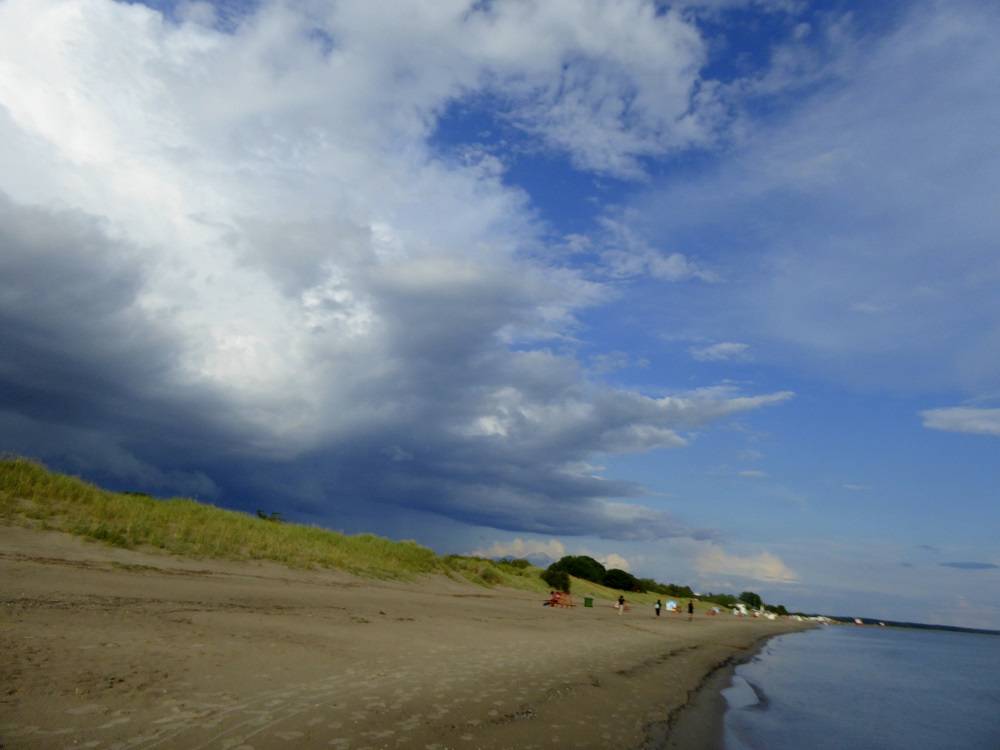 Even so, there has been much fine tuning in what is now a whole week of extraordinary music-making, most of it in the state-of-the-art concert hall which is the last thing new visitors to Pärnu expect to encounter. The chamber events which for me are just as essential to hear great playing as the big orchestral concerts, and to discover new repertoire, have been streamlined to include a programme curated by Estonia's next greatest composer after Arvo Pärt, Erkki-Sven Tüür, turning 60 this year and also featuring as composer in the repertoire, and another selected by photographic artist Kaupo Kikkas alongside the images of his “Ansel” exhibition in the recently revitalised Pärnu Museum of New Art.

Visitors who always turn out to further embody the special festival spirit this year included a quintet led by the phenomenal Hugo Ticciati, making sure that every phrase came alive in a constantly engaging sequence of chamber music by Estonians Tüür and Tõnu Kõrvits alongside equal master, Finn Sebastian Fagerlund, Schoenberg's First Chamber Symphony in Webern's slimline version – from this experience, very much to be preferred to the densely screaming original – and a delicious yet serious duo of Swedish folksongs in a jazz trio arrangement (pictured below by Kaupo Kikkas: Ticciati, barely visible flautist Janne Thomsen, pianist Heini Kärkkäinen, clarinettist Christoffer Sundqvist and clarinettist Jamie Walton). 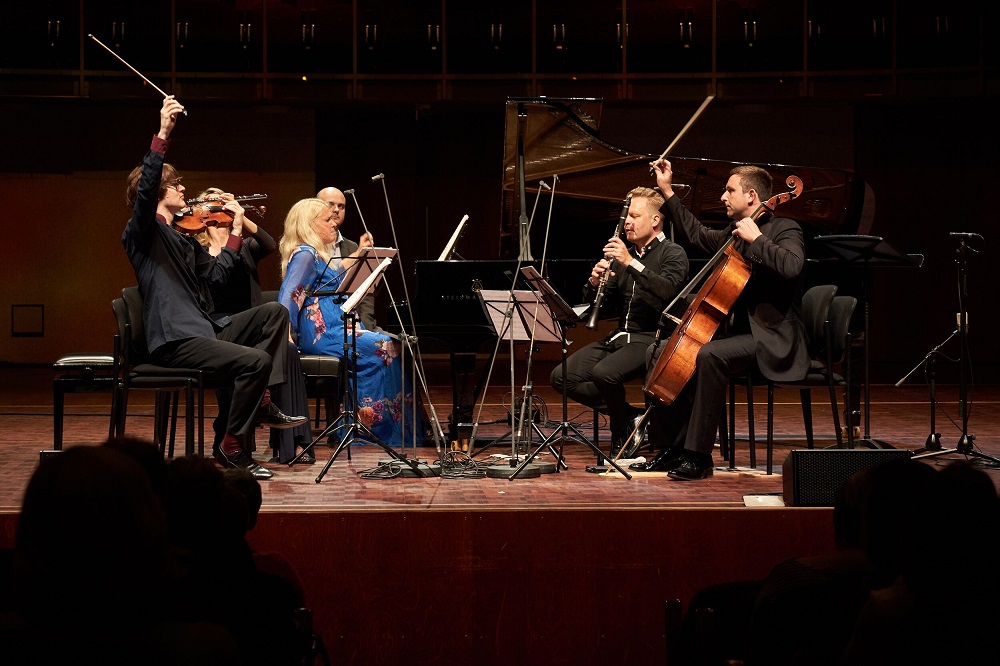 In fact the first notes I heard in this concert, having missed as so often Neeme Järvi's opening event with the Tallinn Chamber Orchestra, were as emblematic of a special aspect this year as Elisabeth Leonskaja's late-in-the-day decision to join with four of the world's best wind players in the Beethoven Quintet, first revelation of 2018. Clarinettist Matt Hunt, as much a leader of Paavo Järvi’s Estonian Festival Orchestra as violinist Florian Donderer, had been one of them; but here, in a clarinet arrangement from the saxophone solo original of Kõrvits’s Singing over the Seas, we listened open mouthed to the creativity of Christoffer Sundqvist. 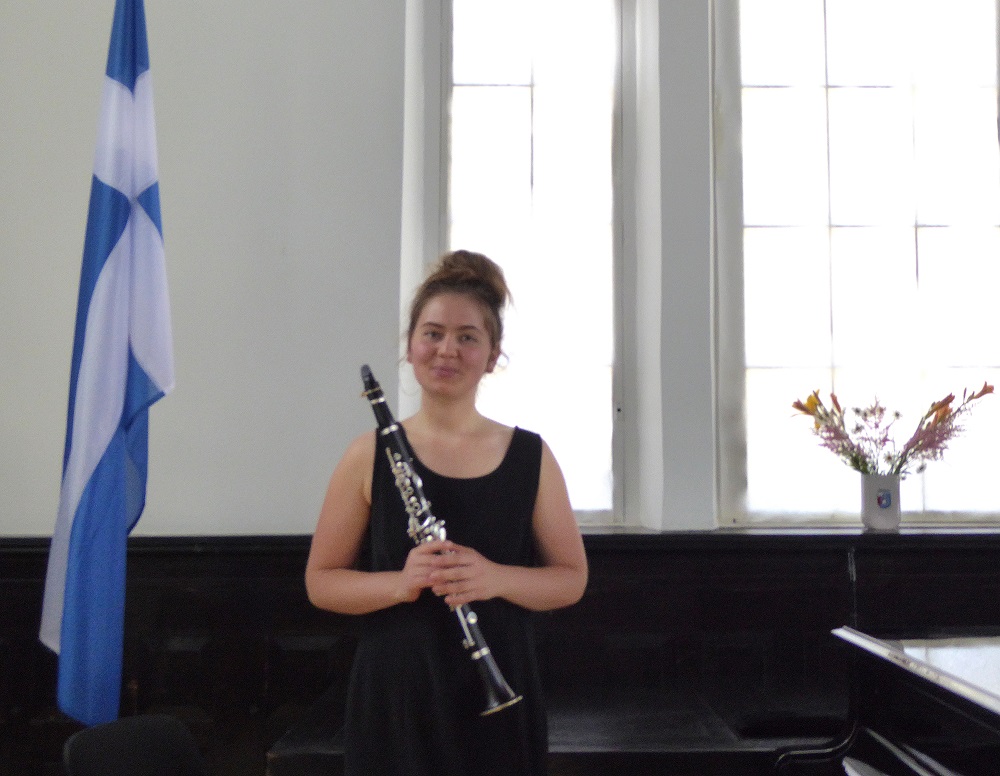 The next morning, among 12 participants of the International Järvi Academy Masterclasses for strings and wind performing at the town hall – yes, dear reader, I heard them all – there was an absolute standout: Lithuanian clarinettist Morta Kacionaite (pictured right), stunningly charismatic in Jorg Widmann’s madcap Fantaisie. She’d been working with a soloist of calibre equal to Widmann the instrumentalist, Kari Kriikku – I wish I’d known he was there earlier – and told me emphatically that she thought Sundqvist was a more engaging player than Berlin Philharmonic principal Wenzel Fuchs had been in Mozart’s Clarinet Concerto on the first night. 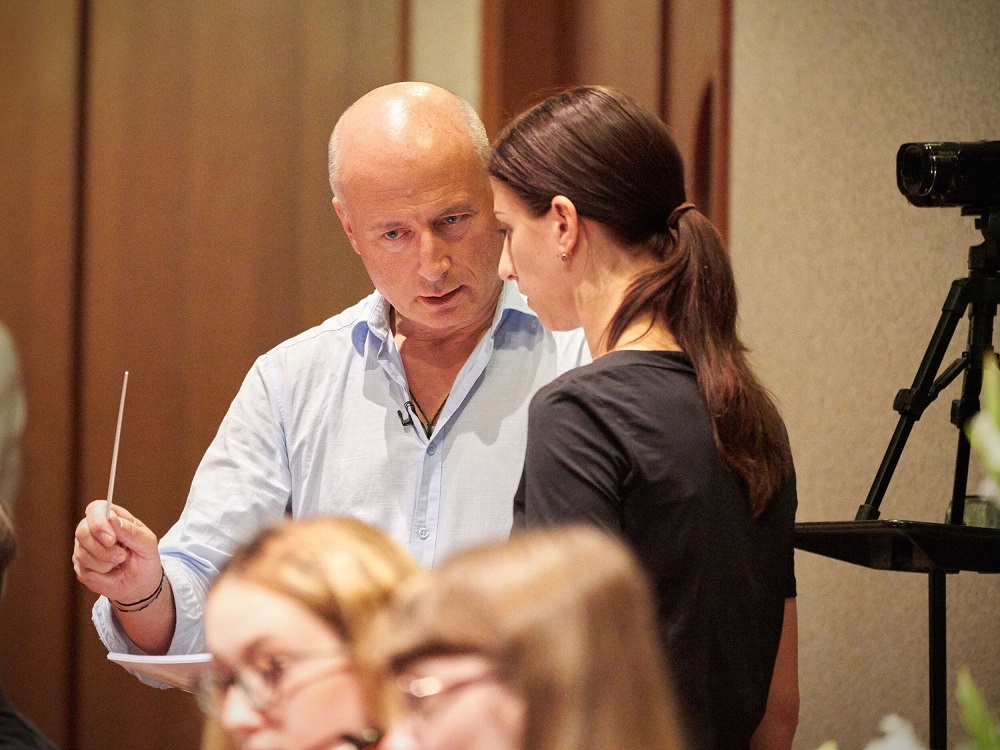 The abundance of young players – that morning other remarkable soloists included flautist Ekaterina Kornishina in another wind solo, Bozza’s Image, among at least two-thirds of the performers you’d be happy to hear on a professional stage anywhere – could be confusing: the Academy Sinfonietta playing on the Wednesday night included many players from the main EFO, outstandingly so oboist Riivo Kallasmaa who shone especially in the best of the academy conducting students’ Stravinsky slots, former Estonian ballet dancer Maria Seletskaja (pictured above by Kaupo Kikkas with Paavo Järvi) taking charge of Pulcinella’s Theme and Variations and Vivo movements. The big showcase for the all-youth Academy Symphony Orchestra and its conductors came on the Saturday, and saw the young mostly Estonian players reach new heights this year in a stunning performance of Honegger’s hard-hitting Third Symphony (the Liturgique). 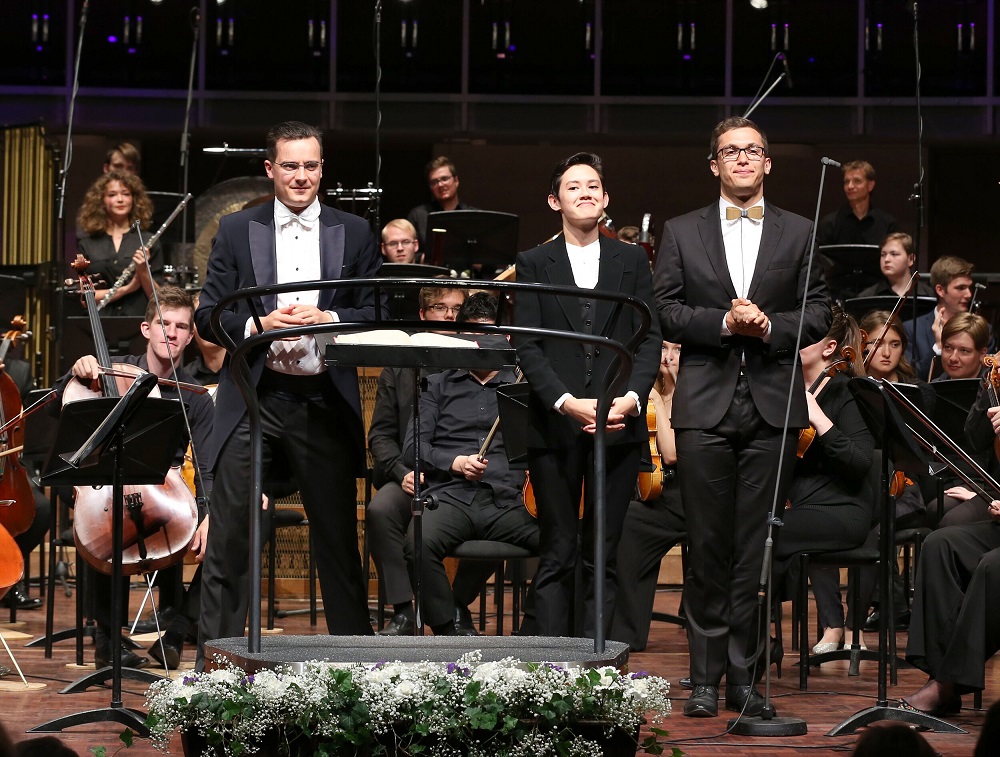 Clearly three of the most experienced conductors had been unleashed here, and together they wrought a perfect triptych: the first movement going to another Estonian, Edmar Tuul, the centrepiece to the immensely stylish Stephanie Childress of the UK, the third with its great redemption to Russia’s Yaroslav Zaboyarkin (the three pictured above by Kaupo Kikkas). Elsewhere Taavi Oramo (yes, son of Sakari, with much experience already to his credit) seemed to me to strike the right flowing tempo for the Andante of Mozart’s Symphony No. 38, ensuring it didn't become a slow movement, while Brazil’s José Soares Filho amazed those who’d found him introspective in the early stages by making the whole orchestra airborne in the finale. 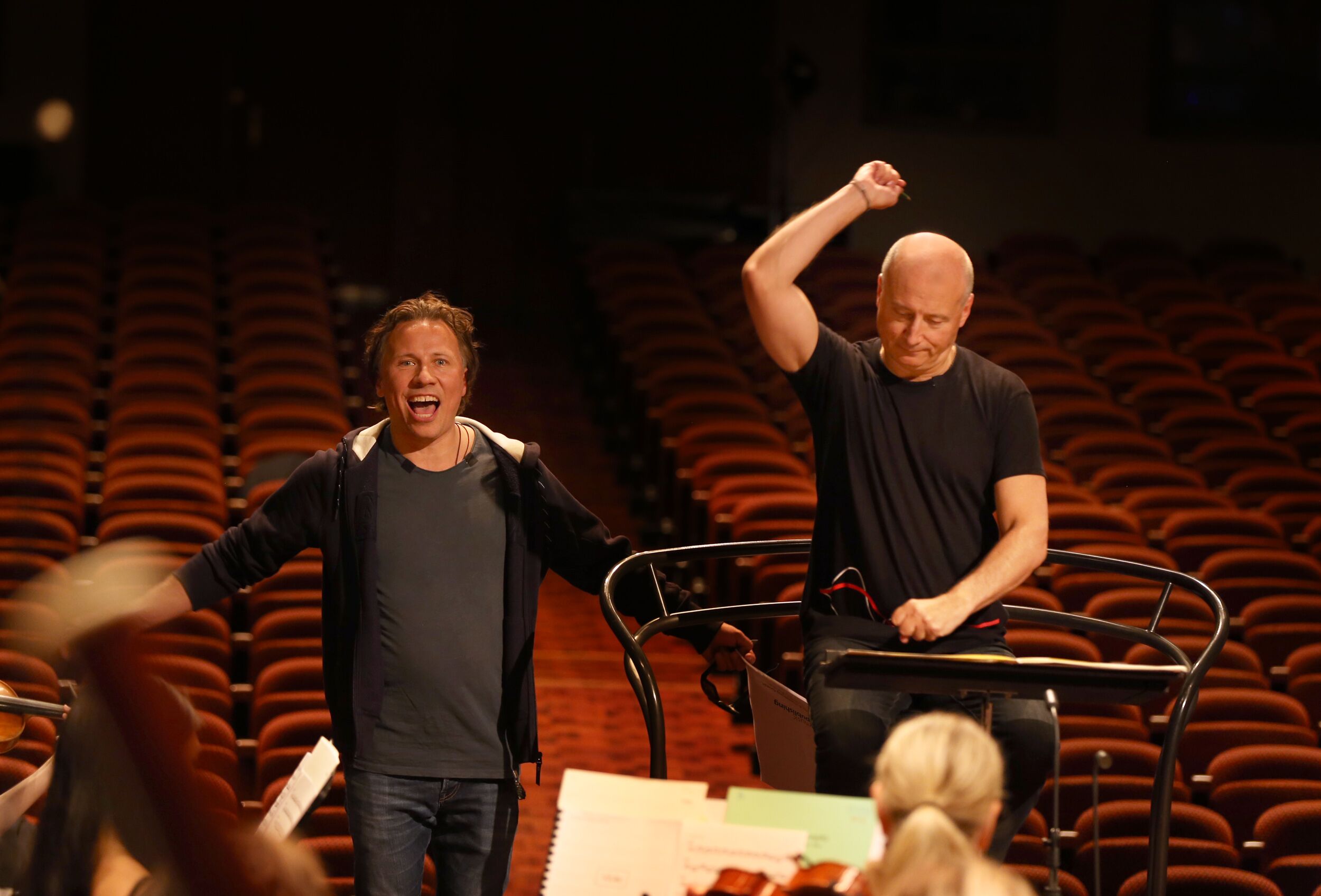 The masterstroke had come from Kristjan Järvi (pictured right with brother Paavo rehearsing his Korale for 80), whose Baltic Sea Philharmonic often plays from memory, to get all the players except cellos to stand in the middle of a masterclass. The energy and contact with the conductors shot up, and they kept it for the concert’s second half, which also included a gracious performance of Bruch’s Double Concerto, originally for clarinet and viola but here shared between the EFO’s front-desk top violinist Triin Ruubel and star viola-player Mari Adachi.

One of the best horn players in the world from the best of all festival orchestras, Alec Frank-Gemmill, was also on the conducting course, and had taken centre stage in Strauss’s First Horn Concerto with the Academy Sinfonietta. Even more magical, though, was his first solo in the Dvořák Cello Concerto at the heart of the first big concert. Though there could have been no more nuanced soloist than Truls Mørk (pictured below in rehearsal by Kaupo Kikkas), the striking thing here was to realise that this is a symphony-concerto, with the wind absolutely crucial throughout. They were especially so as Paavo Järvi dared to stretch the tender coda of the slow movement into infinity, with fathomless perspectives, almost making the finale, brilliant and ultimately moving though it was, irrelevant. 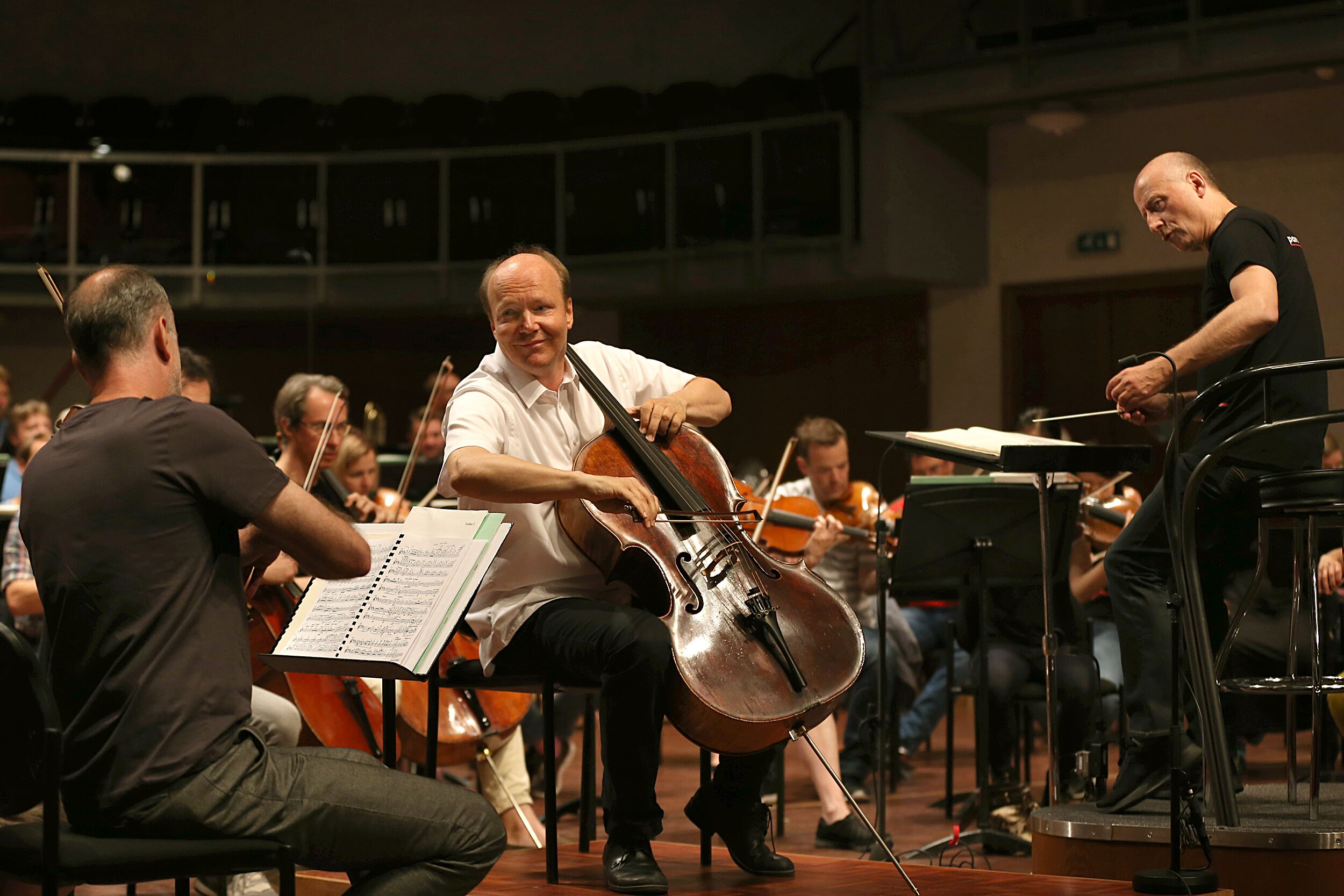 There was vibrant re-evaluation, too, of Nielsen’s First Symphony: very much the great Danish individual from the start, giving the quirky lie to any idea that this is a romantic throwback and life begins with No. 2, “The Four Temperaments”. Absolutely equal in their company was Tüür’s perfect writing for strings in L’ombra della croce (The Shadow of the Cross), an exquisite homage to Gesualdo. Admiration for this great Estonian composer grows all the time; two years ago at the festival we heard his Licthttürme (Light Towers) II as a piano trio, magical then, but the shimmering gained from its quintet version in the hands of Ticciati and friends was absolutely transformative. 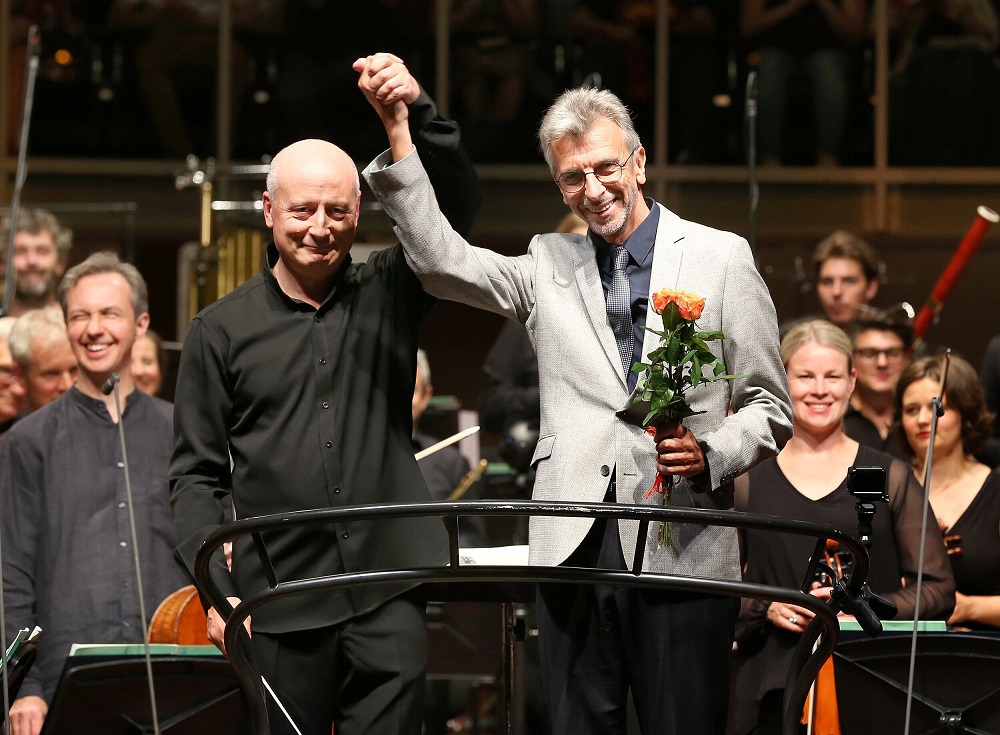 Tüür’s curation of this year’s chamber concert, in contrast to the fabulous but baggy-monster marathons of previous years, gave shape to different ensembles from the Festival Orchestra. It was startling to be plunged straight into the aphorisms of Berg’s Four Pieces for clarinet and piano from live wires Hunt and the young pianist on the Academy master classes Maksim Štšura; Webern’s quartet Bagatelles focused the mind even more intensely before the poetry and high jinks of Ligeti’s Six Bagatelles for wind quintet (pictured below by Kaupo Kikkas: Michel Moragues, Riivo Kallasmaa, Björn Olsson, Rie Koyama and Matt Hunt).

The one outsider of the evening was a septet arrangement of Sibelius’s En Saga in its original, more unwieldy version; it was made by Gregory Barrett on the grounds that the composer had originally sketched it for this combination, but we don’t know what that sounded like, and to omit an oboe from the textures seemed like a serious mistake. 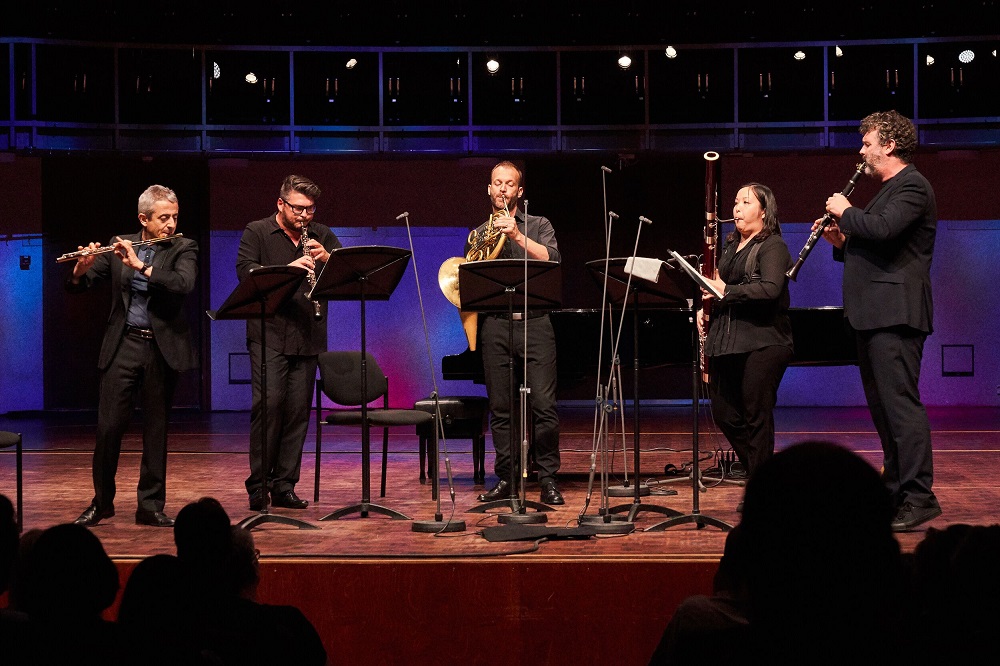 Revelation of the entire festival, though, for me, was a supernaturally beautiful performance of the elaborate and sometimes elusive String Sextet Korngold composed at the frankly unbelievable age of 17. This eclipsed even the wonders of another chamber work I didn't know, Glière's String Octet, two days earlier. Donderer had wanted a perfect balance of Estonians – young Robert Traksmann, a violinist of incredible promise, alongside the well-established viola player and conductor Andres Kaljuste and Estonian National Symphony Orchestra principal cellist Theodor Sink – with distinguished visitors (himself, Adachi and the EFO’s own principal cellist Georgo Anichenko). All players made their individual and collective presences felt, with Donderer seemingly soaring to heaven in his higher-lying lines, perfect in intonation like the rest. 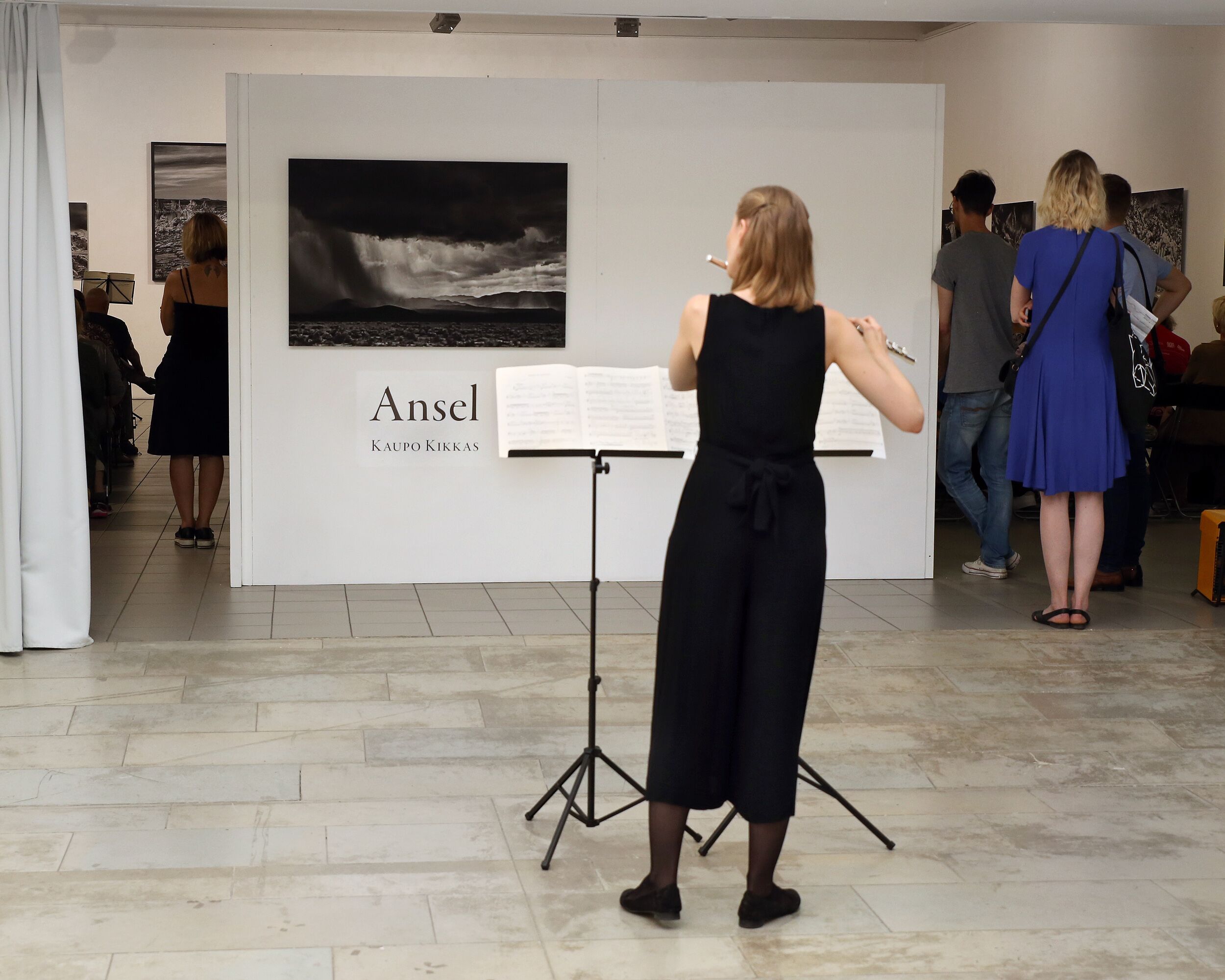 Kikkas’s choice was carefully staged at different points in the gallery room featuring canvases from his homage to Ansel Adams, many of them departing from the model with single naked figures dwarfed by the landscapes and given biblical titles. Meditations by Arvo Pärt for counter-tenor and string trio, ending with the supremely haunting Burns declamation My Heart’s in the Highlands, framed nature-related works by leading Latvian composer Pēteris Vasks, the “Summer Tunes” of his Second String Quartet – one movement rather than three makes the point – and Landscape with Birds played by Maria Luisk from the next room (pictured above), giving us the necessary air the gallery was lacking on that hot afternoon.

Nature as violent rather than still lashed us at the start of the final concert in Tüür’s Sow the Wind, a big ask from the undaunted EFO players with so much energetic music ahead. The meditations came in the first two of Musorgsky’s Songs and Dances of Death, not in the most often-used Shostakovich arrangement but an equally sensitive one by Kalevi Aho, and Gremin’s aria from Tchaikovsky’s Eugene Onegin. Estonian bass Ain Anger’s voice is one in a million, though I wasn’t sure he delved deep below the surface in the Musorgsky, and the devoted Prince needs some femininity in his declaration of love for Tatyana to make it truly moving.

That didn't preclude a genially adjusted encore re-run, though.The tour de force came after the interval, with Paavo Jarvi’s irresistibly driven interpretation of Tchaikovsky’s Second Symphony (we had better stop calling it “Little Russian”; maybe the Estonians already have, in deference to Ukraine, another country that’s freed itself from the Russian yoke). Would one be comfortable with this away from the concert hall? An irrelevant question; the finale’s high-kicking variations virtually lifted us out of our seats. No more exciting official ending to a festival could possibly be imagined. 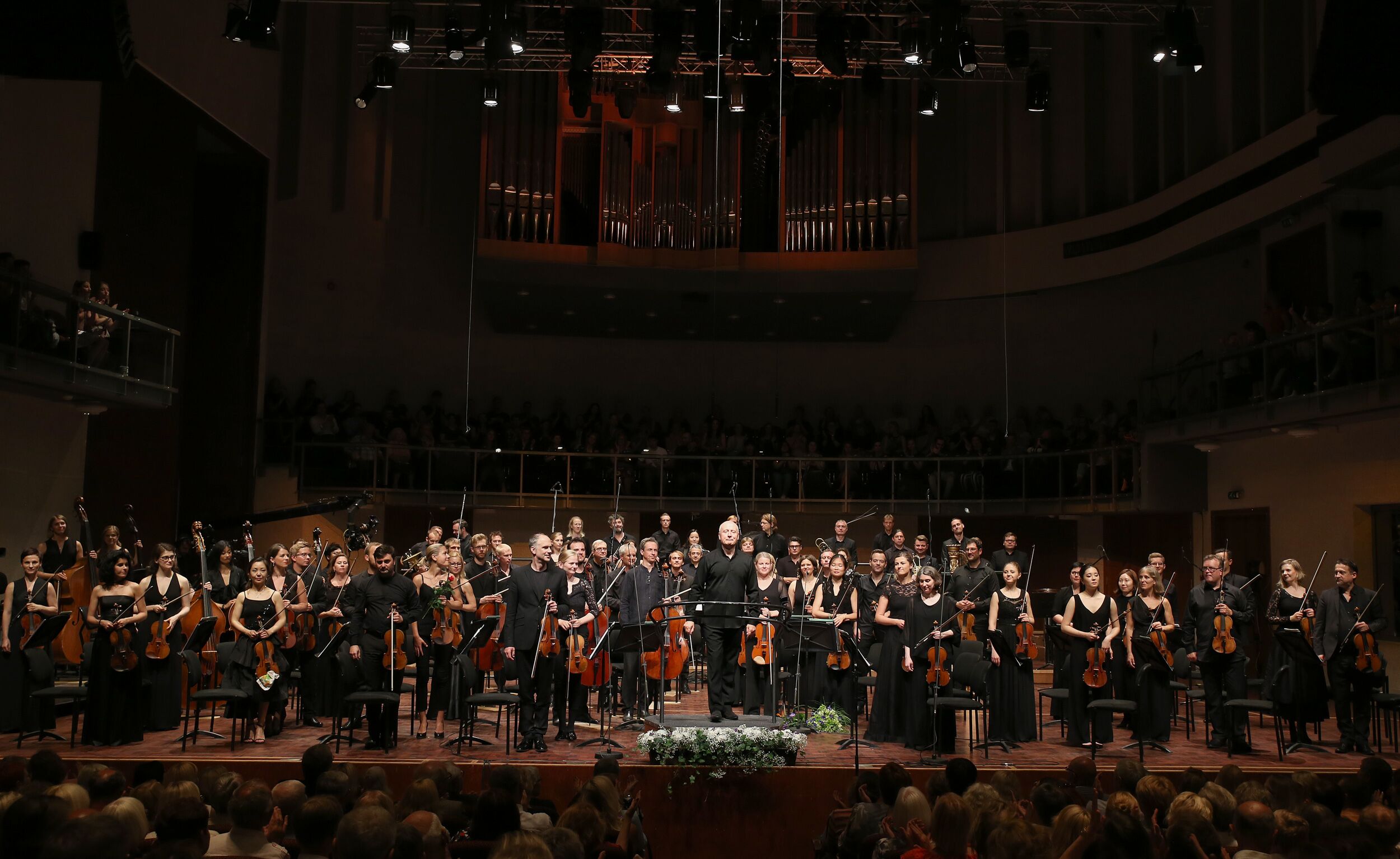 But then there were the usual three encores – Leroy Anderson had been a lively newcomer to round off the first concert – and how could one not welcome them back? With the most intense pianissimo Jarvi and his marvellous strings have yet achieved in Sibelius’s Valse Triste, and fresh inflections from Hunt and Donderer in Lepo Sumera’s parallel waltz, the seal was set: this is definitely one of the world’s great orchestras, and it’s here to stay.

https://theartsdesk.com/classical-music/theartsdesk-p%C3%A4rnu-music-festival-2019-super-orchestra-top-clarinettists-transcendent
Posted by Primavera at 8:04 AM