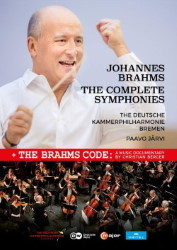 
The press for this Brahms cycle from Paavo Järvi and his Deutsche Kammerphilharmonie Bremen, claims it has been receiving high “public and critical acclaim”. “A Brahms revelation” was the headline in the New Yorker, for Der Zeit it’s “a reference recording” and the Hamburger Abendblatt wrote “the greatest experts in Brahms come from Bremen”. The line-up of Deutsche Kammerphilharmonie is the size that the composer himself was accustomed to at the time, so the booklet lists just ten first violins, and there are about fifty players in total. Not much else seems especially ‘authentic.’ There are valve horns, not the natural horn Brahms preferred, and the strings use vibrato. The violins though are positioned with the firsts on the conductor’s left and the seconds on his right. Of course it is possible to exaggerate the difference in sound between larger and less large groups playing the same music, and some listeners not given to counting fiddles, might not notice that much at all.

It would seem from those press comments that the performances were taken on tour, (the orchestra has no concert hall in Bremen and gives most of its concerts both around and outside Germany), and this filming in Paris captures a well thought-out and polished set of interpretations. But despite being played in the City of Light, the filmed setting is a very dark one, with nothing visible except the players and conductor, no establishing shots of the hall’s interior, or an expectant audience, or even an applauding audience (though they can be heard of course). There is an occasional shot of the platform and proscenium arch from on high, but otherwise the focus is entirely on players and conductor, and therefore on Brahms, not on a grand occasion for a visiting orchestra at the Théâtre des Champs-Élysées. Even the solo ‘curtain’ calls for players and sections at the end of each work show little of the context around the platform. The filming is discreet, with relatively few angles for editors to choose from. Thus in close-up the fine first horn, a key role in Brahms’s orchestra, is mostly seem from the side, flanked by her second horn. But there is nothing that detracts from the music itself, once one settles in to the film’s style.

These performance are all first class. In fact I am not sure when I enjoyed a new cycle as much as this one. True my benchmarks go back to the Jochum, Karajan, Barbirolli and Giulini era in this repertoire – so fifty years or more ago, and each epoch finds a new way with this music. The First Symphony has a compelling line from start to finish, partly due to the modern swift tempo, and partly because Järvi rarely lingers to admire the passing beauties on the symphonic journey. He adjusts tempi and dynamics as Brahms directs, as at fig. F in the first movement, where the strings are marked pp sempre and the winds pp, but the smaller string band allows the winds a clearer place in the balance than usual. This band has some fine wind players, too. In the second movement, the legato oboe solo early on is exquisitely done, as is the famous violin solo at the end. The ensuing poco allegretto is properly con grazia, with delightfully bucolic woodwinds. The horn solo early in the stirring finale is nobly sounded, indeed first horn - such a key player in Brahms - Elke Schulze Höcklemann, is excellent throughput (and in her contributions to the documentary “extra”, along with several of her colleagues). There seems to be no loss of weight in this dramatic C minor work just because this is nominally a chamber orchestra, close to the scale of Brahms’s own preference.

The Second Symphony manages to be both warmly pastoral and symphonically compelling, again thanks to Järvi’s judgement of tempo, and many fine contributions from within all sections of the band. The work glorifies the cellos at times, such as the ‘lullaby’ subject in the first movement and in the first theme of the second movement, and these are so well played we do not miss the full size section familiar from most performances. Järvi refers in the documentary to the flexibility a smaller group has in performance, and there are moments in each symphony where the music suddenly presses on and Järvi can exploit that flexibility and elicit a hair-trigger response from his players. This adds to the excitement in such passages as the switch in the Second Symphony’s third movement, after the beautifully played opening oboe led Allegretto grazioso, to the scurrying Presto section. A joyous coda – Järvi asks in rehearsal for it to be “more Handel, less Bruckner” - sets the seal on the blazing finale. No wonder many players have smiles on their faces.

The Third is the least played but possibly most loved of all four works Järvi suggests, and everyone plays it con amore. There is a bittersweet yearning tenderness to the third movement here especially, but there is plenty of fire when needed, as in the very opening which Boult said he found this hard to conduct - such passionate, yet slow music to open a work – but Järvi and his players plunge us into the drama at once. In fact Järvi is the sort of conductor who, when watching him, gives me the impression that if I were an orchestral player, I would know exactly what was required of me! He drives the finale on with a classical sense that each episode must be accommodated within the basic tempo, right up until the symphony’s coda, when the work’s opening theme returns in ghostly guise, then fades poetically away.

The performance of Symphony No. 4 is well up to the level of its three predecessors. It is also the one where I expect a certain massiveness at some moments that the smaller forces cannot deliver. You will not hear dense saturated string tone for the second movement’s lovely theme on the cellos, or at the return of the opening theme on divided violas (when we have but five to begin with). But these passages work perfectly well, and the leaner Brahms is arguably most suited to the Fourth with its roots partly in the Baroque era. The scherzo is very lively but still the feeling is giocoso as marked. But if you want one movement to judge the quality of the Deutsche Kammerphilharmonie players as individuals and as a group, this work’s passacaglia finale would be as good a place as any. The Parisian audience loved these concerts and show their enthusiasm.

While called a “bonus” in the usual way, the documentary film: “The Brahms Code” is really a more integral part of the package than that. It is on a separately cased single DVD doubling the width of the box for a start. It has a short (8:16) general introduction, then explores the four symphonies in four separately indexed chapters, with contributions from some of the orchestral musicians and from Järvi. It thus has the same format and director as the equivalent DVD set from this team of the four Schumann symphonies, and their Beethoven cycle. It is clear that Brahms does not mean a day at the office with an overplayed composer for this group, he is “their composer”, and there is a spontaneity born of the sort of preparation that leaves room for it, as we can see in the collaborative working in rehearsal (mostly in English).

There are very good DVD filmed sets of the Brahms symphonies from other groups of course, including those from the Dresden Staatskapelle and Thielemann (2 discs), and from the Cleveland Orchestra and Welser-Möst (3 discs). The latter is especially attractive, as the three discs have much more music than we get from the Deutsche Kammerphilharmonie; Haydn Variations, the two overtures, the Violin Concerto with Julia Fisher and both Piano Concertos with Yefim Bronfman, as well as bonus talks between conductor and soloists. But those are both full-fat Brahms from full sized orchestras. But if the original-scale approach appeals, then this Järvi set is well worth investigating. The sound is good, clear and well-balanced, but no more than that. There is a blu-ray option which I have been able to sample, and it has as you would expect the better picture (you can see something defined in those black areas), and superior surround sound. But if you are looking just for the DVD format, and you want a filmed Brahms cycle with splendid performances, this is highly recommended.