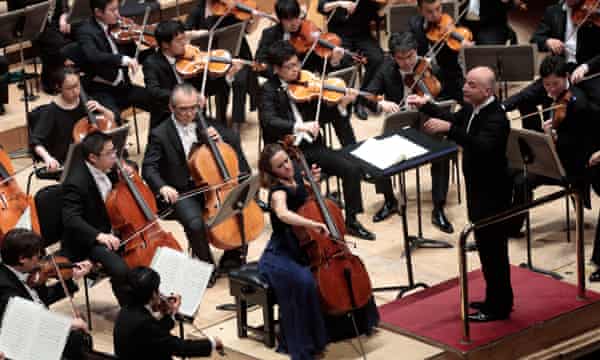 Paavo Järvi’s first European tour with Tokyo’s NHK Symphony Orchestra, three years ago, featured sensitively played Takemitsu and driven, exciting Mahler. This time, in their performance of Rachmaninov’s Symphony No 2, the drive was so great there was little room for anything else.

First came more Takemitsu – his Emily Dickinson-inspired work How Slow the Wind at once peaceful and restless in its shimmering repetition. Perhaps the forces might usefully have been kept at chamber orchestra level for Schumann’s Cello Concerto. Sol Gabetta’s poised playing of the solo part began in measured, thoughtful style, and had a spirited intelligence, with no empty bluster. But the balance very much favoured the orchestra, even though Järvi kept them down. At least as Gabetta played – and sang – her mesmerising encore, Pēteris Vasks’s Gramata cellam – Dolcissimo, there was no need to compete.

The first movement of the Rachmaninov was a lesson in how to keep this music from getting stuck. Some passages were led by melody, others unfolded simply as progressions of harmonies. The willingness of Järvi and his orchestra to push onwards in one of the most wallow-able symphonies around was gratifying, but the insistence on the underlying rhythmic drive tipped over into something that felt almost mechanical. There was no doubt the music was going to reach its destination, so where was the struggle? The arrival of the finale didn’t bring the sense of release that this mammoth work needs. But the encore was a celebration – as the Estonian Järvi pointed out, it was his country’s independence day – and the strings’ playing of Heino Eller’s Homeland Melody felt soulful, even if there were few Estonians in the hall.

https://amp.theguardian.com/music/2020/feb/25/nhkso-gabetta-jarvi-review-royal-festival-hall
Posted by Primavera at 6:06 AM