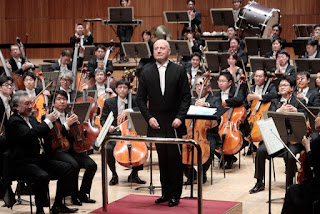 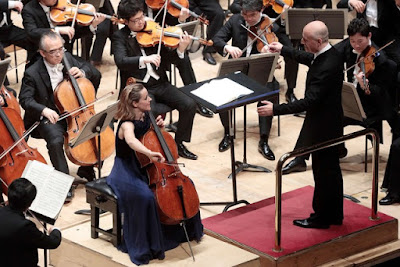 Sol Gabetta, Parvo Järvi. photo : Belinda Lawley
Schumann’s Cello Concerto is in some ways an enigmatic work. It eschews both a conventional structure – although its three movements are distinct, they are played without a break between them – and it lacks the virtuosity of many cello concertos written during the same period of its composition. In another sense, it might not necessarily be a piece one would wish to play with an orchestra quite as powerful as the NHKSO.
What the work has in common with some of Schumann’s symphonies is a lyricism which is suggestive of lieder. The development section of the first movement is a substantial dialogue between the orchestra and soloist; the slow movement can sometimes appear in its poetic inspiration like a series of disconnected phrases; and there is even the hint of a duet with the soloist and principal cellist. Sol Gabetta showed considerable skill in navigating much of the concerto’s challenges. There was a femininity to her playing, a vocalisation to her fingering which understood the work’s inner voices. In her duet with the NHKSO’s cellist, Ryoichi Fujimori, the difference in tonal colour worked well. But there is also a strength and force to Gabetta’s playing which comfortably rose above the orchestra’s brawnier strings; and her meditative, sometimes contemplative interpretation of the work was projected rather than understated. If not an epic performance that relied on power (but then this work hardly needs it), it was one which easily contextualised the concerto’s emotional curves.
The concert had opened with Takemitsu’s How Slow the Wind. Based on an Emily Dickinson poem from 1883, it is his only piece for chamber orchestra, and certainly different in style and meaning to another setting of this poem by the Argentine composer Osvaldo Golijov who had written the piece for soprano and string quartet.
It is probably wrong to interpret Takemitsu’s orchestration of the work as being more large scale than one expects it to sound in performance. Its strings (8-6-4-4-2), and the delicacy and restraint of the writing that Takemitsu gives to them, is never going to stretch the tone of the players – not even for a string section as rich as that of the NHKSO. If this often felt more like a Japanese version of Haydn it was because it largely was. The work is grounded on repetition – rather a lot of it – and it is a balancing act for the strings of any orchestra to make the length of the piece not outstay its welcome. The NHK strings had an elasticity of colour, a delicacy of sound, and an ability to shape-shift what came before and what came after. Some of the orchestration might feel a little odd, even perhaps cluttered – the cowbells, the variegation in percussion – a vibraphone and glockenspiel – a harp, a piano and celesta but this is an orchestra which is notable for its clarity and the way it can make textures distinctly separate. That is exactly what we got here under Järvi’s knife-like and precision conscious baton.
The only encore of the concert – unlike the luckier Estonians who had been given two, the other being Sibelius’s Valse Triste – was Heino Eller’s Kodumaine viis. A reminder of Järvi’s roots, that country’s Independence Day and the NHK Symphony Orchestra’s glorious string section it perhaps settled once and for all what makes this orchestra such a special instrument.

https://classical-iconoclast.blogspot.com/2020/02/parvo-jarvi-nhk-symphony-orchestra.html
Posted by Primavera at 5:55 AM