Sol Gabetta and the NHK Symphony Orchestra impress in London 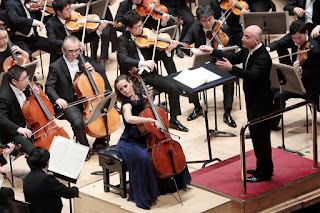 Toru Takemitsu – How slow the wind
Schumann – Cello Concerto in A minor, Op.129
Rachmaninov – Symphony No.2 in E minor, Op.27


A couple of years ago, I reported on Japan’s NHK Orchestra and Paavo Järvi’s powerful Mahler Sixth Symphony, coupled (sans interval) with Takemitsu’s 1957 Requiem for strings. There was more Takemitsu this time, but moving forward to 1991 for How slow the wind, inspired by the Emily Dickinson poem (‘How slow the wind – How slow the sea – How late their Feathers be!’: note that in some editions the word ‘feathers’ is replaced by ‘fathers’). Takemitsu uses a sequence of seven notes as his main motif which itself seems to come in waves. Interestingly, there is a moment at which the music seems to refer to a passage in the slow movement of Rachmaninov Second Symphony – or perhaps that was wishful thinking in the light of the present programme … The strings were very secure in tuning, but a little more depth of tone might have sealed the deal. Atmospheric, nonetheless.

The real high of the evening was Sol Gabetta’s superb reading of the Schumann Cello Concerto. This is a late work, and immediately we were in a very different world from the Takemitsu, the players of the orchestra adjusting at once. Sol Gabetta is a radiant soloist, her legato superb, her sense of the elusive, the enigmatic late Schumann making the best possible case for this piece. Her sound is generous, often glorious, but always serving the sometimes complex ongoing argument. Added to this, Paavo Järvi is one of the finest of musical partners, those interjecting orchestral chords always on point.

A rather nice aspect to Schumann’s writing is the use of a solo cello from the orchestra to act in duet with the soloist in the central ‘Langsam’; the soloist’s stopping at this point further enriches the textures. The bright and brash finale (which also holds the cadenza) was a triumph for both soloist and orchestra, Järvi finding both grandeur and, later, elfin lightness. The orchestra is also complicit in the cadenza, here another testament to the connection between Gabetta and Järvi.

Gabetta’s encore was Peteris Vasks’s Dolcissimo from Gramata Cellam, something of a regular encore for her, it would seem. She played it also at the First Night of the Proms in 2016 as well as after a performance of the Schumann Cello Concerto in Lucerne with the Royal Concertgebouw Orchestra in the same year. It is a haunting piece, its difficulties tamed beautifully by Gabetta (it also includes passages in which the cellist is asked to sing as well as play – which she did, beautifully).

The second half symphony was Rachmaninov’s Second in a generous, emotive performance. The first movement offers many challenges to the interpreters, not least tracking its structural shape. Järvi’s view was clear-sighted, honouring the mystery of the Largo opening (wonderful viola section, lovely cor anglais forming a link to the Allegro moderato). The brass section was resplendent and perfectly controlled; the orchestra’s finest section, closely followed by the superbly drilled woodwind. The strings again could have exuded greater depth, and the leader, Fuminori Maro Shinozaki, had a rather raspy sound. Yet en masse the strings did capture the tortured rapture of Rachmaninov’s outpourings.

The strongest movement was the second, the jaunty Allegro molto, Järvi keeping the momentum going and eliciting a superb orchestral crash prior to the fugato. The famous Adagio included a lovely clarinet solo; in fact, the woodwind were the clear stars of this outpouring. Perhaps a touch of Oriental reserve (despite this orchestra’s reputation for its expressivity) was just the thing to avoid the music devolving into schmaltz; it also meant that the interweaving of lines was more obvious – and even revelatory – than the norm. The long finale is an interpretative challenge – in the wrong hands it can seem to be over-long for its material. Järvi and his players negotiated its soundscape with aplomb, allowing the details of Rachmaninov’s sometimes drenched scoring to make their mark.

There was one encore at the end of the concert. Celebrating 102 years to the day of Estonian independence, we heard Heino Eller’s ‘Homeland Tune’ from ‘Five Pieces for String Orchestra’. What better way to mark this than in London with a Japanese orchestra, asked Järvi; reasonably, I thought, although perhaps he could have mentioned the Argentine cellist along the way.

https://seenandheard-international.com/2020/02/sol-gabetta-and-the-nhk-symphony-orchestra-impress-in-london/
Posted by Primavera at 8:55 AM